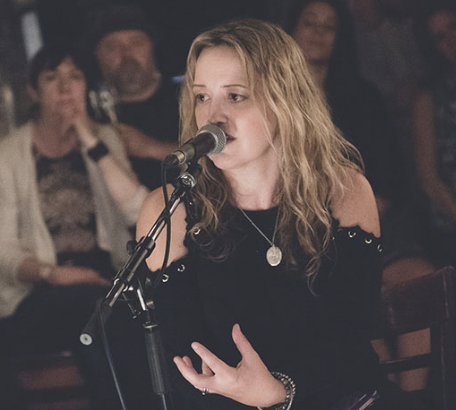 Nova Scotia-born, Toronto-based Andrea England earnestly describes her life as “all music – all the time.”

A respected member of the Canadian songwriter community, this founder and host of the popular songwriter-in-the-round series, Four Chords & the Truth, regularly lands cuts with artists as musically diverse as CCMA Female Artist of the Year, Meghan Patrick, and former Pussycat Doll Nicole Scherzinger; and, every now and then, she also releases an album of her own. Her last effort, Hope and Other Sins, produced by Grammy Award winning producer/guitarist Colin Linden, spent several weeks on Cashbox Magazine’s Top 50 Folk chart and hit #1 on Galaxy’s Folk Roots Radio; and her previous release, Lemonade, spawned numerous network TV placements and international songwriting awards (John Lennon, International and USA Songwriting Contests), kickstarting her career as a songwriter. No stranger to the stage, Andrea has also performed at SXSW, NXNE, CMW, NSMW, CCMA, ECMA, OCFF and FAI Music festivals and, recently, was honoured to host her first Four Chords and the Truth round at Nashville’s famed Bluebird Café.

Andrea also is the Business Analyst and Web Services Product Manager at the Canadian Musical Reproduction Rights Agency (CMRRA), a SoundExchange company, where she is the primary steward for CMRRA’s web service offerings, including CMRRA Direct and the Unclaimed Works Portal among others. Fun fact: prior to moving to CMRRA, one of Andrea’s first music industry roles was – fittingly – Membership Coordinator at the S.A.C., and it was in this position that her passion for creators’ rights really began to blossom.

A proud alumnus of Dalhousie (Gender & Women’s Studies) and St. Francis Xavier Universities (English Literature), Andrea also believes in the power of education and the importance of giving back: she has led songwriting workshops for the Honey Jam, GuitarWorkshopPlus, the Singing Competition, Elaine Overholt’s Big Voice Studios, and teaches Lyrics 1 in Seneca College’s Independent Songwriting and Performance Program. Andrea also sits on the Dalhousie Arts Centre Campaign Cabinet, is a staunch supporter and charity partner (via Four Chords & the Truth) of the Unison Benevolent Fund and is a voting member of both the American and Canadian Academies of Recording Arts & Sciences as well as an active juror for the category of Songwriter of the Year in numerous regional and national organizations.