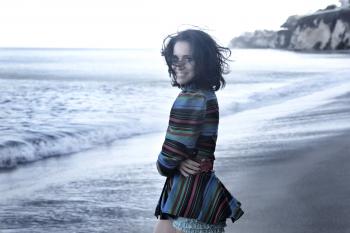 @chantalkreviaz
Chantal Kreviazuk has been awake for hours, making sure that her three boys have been fed and dressed. She is also well into her day job, which today finds her writing songs for Faith Hill’s upcoming album. Somewhere along the way she’s begun working on live arrangements for her first tour in years and is looking ahead at a full schedule of interviews to promote her own new album, Plain Jane. It’s not even 9am.

This is all normal for Kreviazuk, who finds herself in the middle of being a mommy, a performer and a sought-after songwriter. She is oblivious to the fact that she’s the antithesis of her album title, a woman who has quietly built one of the most envious careers in music. She shrugs off any suggestion that she’s a Player. “It’s very hard for me to put on. I think I’m incredibly boring.”

It’s been anything but a traditional ride through the music business for Chantal. Her first album was shot out of the Canadian Music Cannon, snagging a Juno nomination for Best New Artist. Her three following albums would cement Kreviazuk as one of the premiere female artists in Canada.

It was a cover of John Denver’s “Leaving On A Jet Plane” (from the Armageddon soundtrack) that gave Kreviazuk a break in The USA. She wisely realized that this method of reaching an audience was as important as the radio, which at the time was seen as the primary force behind album promotion. While other artists were scraping by and lamenting their priority status at their record label, Chantal kept busting out songs for the big and small screens. Dozens of placements followed; Dawson’s Creek, Everwood, Uptown Girls, Joan of Arcadia, Serendipity, Sisterhood Of The Traveling Pants, How To Lose A Guy In Ten Days, Seven Pounds, Confessions Of A Shopaholic, Men In Trees, The Hills, Army Wives…the list is as long as your arm.

Music supervisors and label executives took note of Chantal’s extracurricular writing, asking for songs that could be worked into a film, or into the album of a developing artist. Managers and A&R executives began sending new artists to her Los Angeles house, in hopes that time spent in her living room will churn out a breakthrough track. It paid off. Co-writes with Kelly Clarkson and Avril Lavigne locked in her reputation as a prolific songwriter, as have further songs with/for David Cook, Gwen Stefani, Hilary Duff, Mandy Moore and Carrie Underwood, among others.

It’s rare for Kreviazuk to get through a sentence about her music without mentioning her husband and longtime musical collaborator, Raine Maida. Their ten-year working partnership runs the gamut; producing tracks for young bands, writing songs for superstars and recording their own albums. Still, the two are quick to ditch work in favor of a movie night with the kids, or important time with the family in Ontario. Keeping the two sides of life separate is important to Kreviazuk, who says, “We love music and that part of our lives but I think it’s beautiful that we have managed to balance family and not let work take over.”

Working with Warchild Canada and other causes close to her hear including The Canadian Mental Health Association and Polar Bears International also help to keep Chantal grounded. She’s traveled to Iraq for Warchild and has been named as an Honorary Founder of the charity. Her work with CMHA is a great outlet to help stamp out the stigma that surrounds mental health. She says, “ I want people to realize that we’re all born with unique challenges. When we isolate people because of their differences, the fabric of our society is compromised.”

Plain Jane finds Chantal releasing music outside of the major label system for the first time in her career. “I was very happy at my label but it turned out that I didn’t know anyone there any longer. So much had changed,” she comments. No punches were thrown, no duels between lawyers. Kreviazuk simply started making a record of her own, not knowing where it would end up. “I didn’t even think about it. I knew everything would be fine.“ MapleMusic Recordings felt like the perfect home for Chantal, who is happy that she’s gotten to know just about everyone who works on her release, something that had been lost long ago.

Ever Chantal’s muse, many of the album’s love songs are surely written about Maida, including the first single “Invincible”. The track was written about a period fifteen years ago, after a major car accident and a subsequent romance with Raine. It was a tumultuous (yet wonderful) time that she’s never talked about until now. “I was at a real bottom after the accident, physically and mentally. Raine really pushed me out of caring about those problems. He allowed me to be OK with myself. “ The lyric concludes, “As long as you’re here I’m invincible.” The obvious love song about Maida, “5000 Days” Kreviazuk says “Is the total valentine, revelation of my passion, pride for how long we have been together, how much we take care of each other, but also some of the darkness...it will, like all things, have to end some day.”

While her husband may be her muse for some of the material she finds herself inspired by or even emulating her greatest influences and in that respect going back to her roots on this album. Going back to the likes of Carole King, Carly Simon and Jane Siberry, voices that are her heroes. “I get increasingly nervous by trends and equally motivated by the classics and find a safety and comfort in producing material which can show an evolution as an artist but will stand the test of time.”

The songs on Plain Jane all feature Kreviazuk’s signature piano-driven songwriting but there are also some playful twists, most notably in the soulful sound of the impossibly catchy track “Ordinary People”, a song that Chantal explains came about after coming to a realization “We all have a daily grind, we all can feel pretty beaten down by it. It’s sort of comforting, knowing that we are truly all in it together.” “Half Of Me” is a great love song, probably the best example of what Chantal means when she says, ”When I write a song there has to an ingredient of strain, yearning and emotion.” Not all of the songs on the album came easily, with Kreviazuk comparing the writing process to labour (both topics of which she is unarguably well versed). The up-tempo track “Today” is sure to be fan favorite, with her insight into reality, “Truly we cannot assume that tomorrow is going to be better, chances are it will not. We have to assume that this moment is the best one we’ll ever know.” This makes Chantal seem like a next-door neighbour, rather than a songwriter with a rock star husband and a house in Los Angeles.

Plane Jane is a diverse album that somehow maintains cohesion; a trick not many artists can pull off. The music is confident, positive, alive and exciting, which is exactly where Chantal is at when you speak with her in 2009.