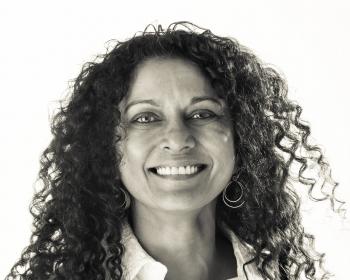 Manager,
Pandyamonium Management
Toronto, ON, Canada
Sandy Pandya paved her own lane in the Canadian music industry, cementing herself as a leader and advancing the careers of the artists she represents. Her passion for music and inability to accept the word “no” supported her affinity for championing underdogs, which afforded her a career spanning over 20 years and counting. Affirming her contributions and achievements to date, Pandya was awarded by CIMA with the 2018 Brian Chater Industry Award.

Regina, Saskatchewan was the first stop on her journey, where Pandya began her career as a live club owner, operator, and promoter by booking and marketing cutting edge artists like Love & Rockets, 10, 000 Maniacs, Hunters and Collectors, and Skinny Puppy. This experience would drive her through different adventures including gigs at leading Indie label, Attic Records, and a marketing position at BMG Records before shifting back into her roots at Celebrity Talent International, a booking agency responsible for acts like Barenaked Ladies, Cowboy Junkies, The Pursuit of Happiness and Skydiggers.

Her ability to balance art and industry evolved into a management firm. Built with like-minded music veteran, William “Skinny” Tenn, their first clients were The Waltons, followed closely by The Lowest of the Low. The two acts were among the first indie bands in Canada to achieve Gold status for record sales and broke new ground by simultaneously coveting the front window display at the flagship HMV store at 333 Yonge in Toronto. Pandya was instrumental in defining and developing the indie rock royalty scene that would reign in Canada through the nineties – this also included work alongside The Cash Brothers.

Within a decade long relationship, Pandya broke boundaries with singer-songwriter, Hayden, by supporting him with the development and operations of his own indie label, Hardwood Records. Hayden would eventually sign a publishing deal that some have touted as legendary, truly illustrating the power of his artistry. These models paid off as it led Sandy to secure duo, Tegan and Sara, their first record deal as Neil Young’s inaugural signing to his Vapor Records label.

Pandya would move into solidifying her space by establishing her own company, Pandyamonium Management. Here, she would manage and develop Hawksley Workman into a multi-brand personality for nearly a decade. Together they created Isadora Records, which saw the release of his first record For Him and the Girls followed by his major label, gold selling debut, Lover/Fighter, which went on to receive international acclaim. During this time, he was also an accomplished bestselling author for Hawksley Burns for Isadora and a renowned producer (Tegan and Sara, Serena Ryder).

From 2005 - 2010, Pandya steered the career of Juno Award winning singer Jully Black. Black surpassed Gold sales on her Universal released record, Revival, during a time when achieving that success was first met with hurdles. All the while, Sandy navigated Jully into a thriving career not only as a musician but a motivational speaker, actor, and celebrity correspondent for CTV’s eTalk Daily.

Amongst Pandya’s current roster is Serena Ryder. She has managed Ryder since the outset of her career at just 19 years old. On Ryder’s behalf, Pandya became the first manager in Canada to obtain shares in a record label. In Ryder’s time with Pandyamonium Management, she has become a multi-platinum, 6 time Juno Award, MMVA, SOCAN and Canadian Screen Award winner. Ryder’s catalog has also been featured in and performed on a remarkable number of film, TV, and commercial projects spanning VEEP, Grey’s Anatomy, American Idol, The Voice, The Tonight Show, Drop Dead Diva, Mob Wives, Suits, Santa Clarita Diet, and advertising campaigns from Ford, HBO, Cadillac, and many others.

Pandya has been instrumental in changing practices for equitable label shares with Warner Music as she was the first to ask them for shares for her artists which is now common practice in the company.