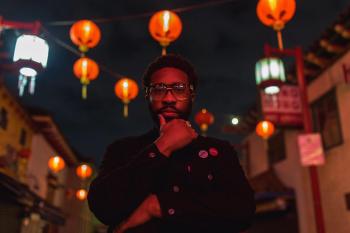 Not your average master of ceremony or MC, Tona, armed with an in depth understanding of the power and the complexity of words, and a love of Hip hop, has developed his own creative niche through aboriginal and versatile demonstrations in an era where the true art of Hip hop seems to have been lost. Tona reminds the listener of the era where Hip hop was authentic, as he incorporates his own life experiences through rhymes. This appreciation for hip hop culture and entertainment would play a vital role in his career.

Hailing from Ghana Africa, Kwame Nantwi's name, "Tona", was given to him because of his distinctive tone of voice, which he uses not only to project his rhymes, but also a unique style that transcends the typical boundaries of the Hip hop genre.

Tona has been a true master of ceremony since the age of 9.  By age 11, he was a member of an ambitious rap group, Young N.A.P.P.S. (Young Native Africans Pleasing People Spontaneously). It was clear, even as a young teenager, that Tona was meant to shine.

In 2006, Tona launched his own licensing company, Da District Entertainment, a tribute to his home district of Scarborough.
"Hip hop in Scarborough feels like the foundation of the culture to me." says Tona, "You couldn't go no where in our city and not interact with it somehow. Even if you didn't understand it, it was there - the music, the streets, the culture. I love my city for that."
The label is meant to help preserve a genuine hip hop movement, which Tona believes is not about gimmicks or slogans, but real people creating real music. Tona has had 5 major releases on the label, including his latest LP, Silverspring Crescent.

The production in Tona's catalogue, (majority of which is produced by in-house production team, alongside Tona himself), encompasses influences from old school hip hop, as well as, a fresh sound similar to new underground electro hip hop.. His release entitled “We Do” was a song that earned him his first Stylus award for “Best Rap Video” in 2012. In 2014, Tona’s catalogue included being placed on the Polaris Music Prize Long List for his politically conscious driven album with “The Freedom Writers”. Recently Tona was the recipient of a Juno award for “Best Rap Recording” in 2015 which happens to be one of Canada’s top honors. In addition to these credentials, Tona was also a winner of the Sirius XM Radio Indies award for “Best Rap Group of the year” both as part the collective “Naturally Born Strangers”. The award is one that recognizes achievements in the urban music scene in Canada.) His track "Dial Tone", off the Don't Holla EP, earned Tona a Stylus Award nomination as well, not to mention a permanent spot on Toronto's influential urban station, Flow 93.5.

Tona continues to play shows internationally, and make a credible contribution to the scene. His entrepreneurial spirit, sharp-witted, and metaphorical rhymes make him one of the best players on the rise in the game of hip-hop.