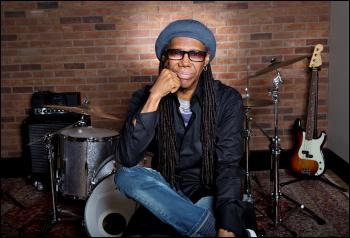 Nile Rodgers is a multiple Grammy Award winning musician, composer, arranger, guitarist and co-founder of the band CHIC. Additionally, Nile is considered one of the most influential producers in the history of popular music and has produced some of the biggest hits in the careers of Madonna, David Bowie, Duran Duran, Diana Ross and most currently, Daft Punk, among other artists.

With Nile’s iconic stature as a true “hit maker” he has brought the world such classic songs as “Dance, Dance, Dance”, “Everybody Dance”, “I Want Your Love”, “Le Freak (Aw Freak Out!)”, “Good Times”, “He’s the Greatest Dancer”, “We Are Family”, “I’m Coming Out”, “Upside Down”, “Like A Virgin”, “Let’s Dance”, among others. Most recently, Nile won 3 Grammy Awards for his work with Daft Punk on their global hit album “Random Access Memories” as well as their massive hit single, “Get Lucky”, which has broken records for being the first song in history to go #1 on iTunes in 106 markets around the world.

In addition to Nile’s own work with CHIC and other notable recording artists, he has also produced music for the critically acclaimed video games Halo (series) and Gears of War.

Nile Rodgers and CHIC continue to tour all over the world and bring smiles, music, dance and “the funk” to people of every age.