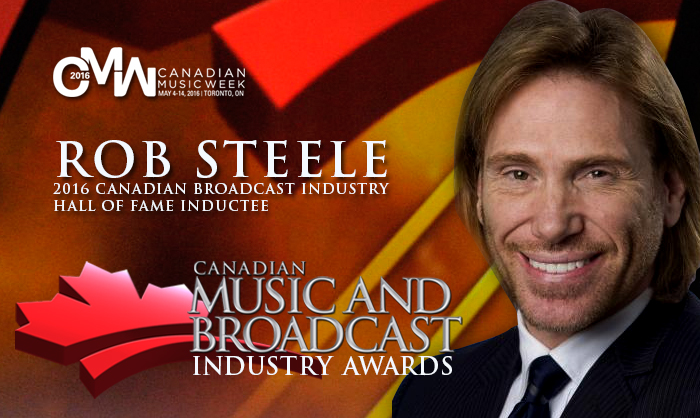 TORONTO, ON – (October 21, 2015) – Canadian Music Week is pleased to announce Rob Steele as the 2016 inductee to the Canadian Broadcast Industry Hall of Fame. A natural leader and pacesetter with more than 18 years in the industry, Steele will be honoured for his achievements and longstanding career in broadcasting at the annual Canadian Music & Broadcast Industry Awards Gala Dinner in the Grand Ballroom at the Sheraton Centre on Thursday May 5, 2016.
“In the decade or more that Canadian Music Week has worked closely with Newcap, we have taken great pride in watching them grow from a regional broadcaster with holdings on the east coast and northern Ontario, to a truly national operator, with stations from coast to coast. Steele, as head of the operation, has been an integral part in both their physical and corporate growth, and has led the way in their acknowledged leadership in talent development and forward thinking broadcasting. We are honoured to recognize him as this year’s recipient of this prestigious award.” Said CMW President Neill Dixon.
“I consider myself truly fortunate to be surrounded every day by the creativity, talent, and passion of the radio industry and the music business. We are in the business of creating entertainment, and that makes every day and every new challenge fun and exciting. We are an industry filled with vibrant personalities, visionary thinkers, and plenty of people who are willing to colour outside of the lines. Not every business has that! What we do is really special, and to be recognized for making a contribution to our industry is a tremendous honour” says Steele.
In 1997, Rob joined the Board of Directors of Newfoundland Capital Corporation (TSX-NCC.a, NCC.b) and in 2001, he assumed the leadership role of President and CEO.  Rob quickly moved to streamline the Company’s investments to focus on radio and NCC acquired its first radio station in 1986 in Charlottetown. By 1999, NCC had grown to 14 licenses.  Under Rob’s leadership, the Company became Newcap Radio in 2015, now operates 95 radio licenses across Canada, including the largest acquisition in its history in 2014 with the purchase of 5 radio stations in 2 of Canada’s largest markets, Vancouver and Toronto.  Newcap is now the largest pure-play radio company in Canada with almost 1000 employees; the second largest radio company in terms of broadcast licenses; reaches millions of listeners each week through a variety of formats (from hip hop to country to classic rock) and is a recognized industry leader in radio programming, sales and networking.
Rob currently sits on the boards of Stingray Digital, Montreal, and Atlantic Signature Mortgage, Halifax. Rob was also Past Co-Chair of the ECMA Event Committee and continues to be involved with the ECMA’s in an advisory capacity.  In addition, he also serves on the Advisory Committee for Junior Achievement of NS, and is also a Director of the Halifax Mooseheads Hockey Club, affiliates of the Quebec Major Junior Hockey League.
Rob is a strong supporter of giving back to the communities where we do business, and both Newcap Radio and the Steele Auto Group are very actively involved in many charitable causes.  Rob is personally involved with organizations such as Alzheimer’s Society, the Mental Health Foundation, Family SOS, Daffodil House, Feed NS and the Arthritis Society.  He was named Outstanding Individual Philanthropist of the Year in 2014 by the NS Association of Fundraising Professionals for the extent of his involvement in and support of various community efforts.
To attend the Canadian Music and Broadcast Industry Awards or for additional details, visit the Canadian Music Week website: www.cmw.net.
About Canadian Music Week

Canadian Music Week is Canada’s leading annual entertainment event dedicated to the expression and growth of the country’s music, media and entertainment industries.  Combining three information-intensive conferences; a trade exposition; a film festival; a comedy festival; four awards shows and the nation’s largest new music festival, CMW spans a ten-day period from May 4 to May 14, 2016 at the Sheraton Centre Hotel and over 50 downtown Toronto venues, attracting participants from across the globe.  For more information, visit www.cmw.net.