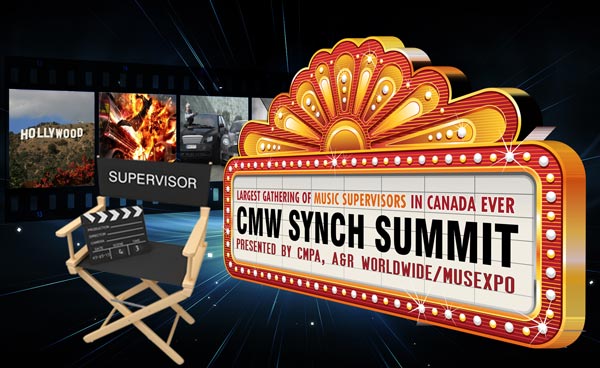 We are pleased to announce the first set of music supervisors confirmed for the 2014 CMW Synch Summit – Saturday May 10th at Canadian Music Week. Presented in association with  CMPA, A&R Worldwide/MUSEXPO, these individuals are just the beginning of what promises to be an impressive line up – and the largest gathering – of music supervisors in Canada ever. 2013 was a sellout. If you are a songwriter, musician or band, don’t miss this exceptional opportunity to speak to these and many more top Music Supervisors from LA, New York, and Toronto directly in face-to-face rotating pitch sessions. 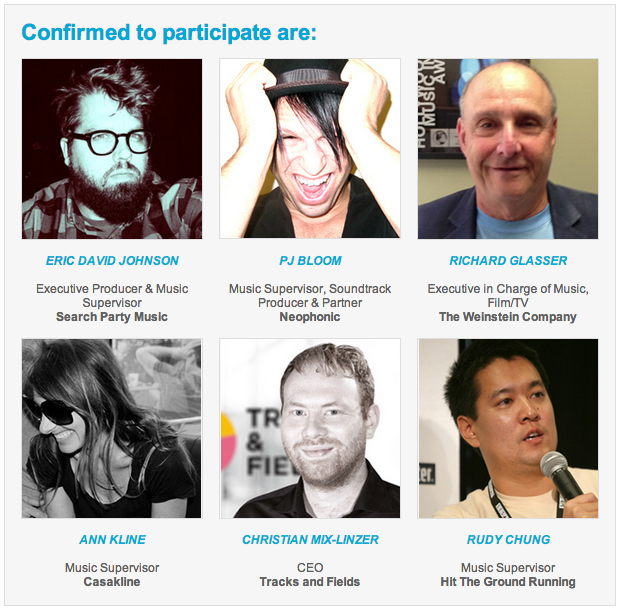 Eric David Johnson (aka DJ Bunny Ears) is a music supervisor, DJ, director, musician, filmmaker, writer, artist, curator, futurist, photographer & producer. Though he is truly rooted as an independent artist, he has spent over thirteen years in the advertising industry, working first at Wieden + Kennedy then at Young & Rubicam New York, DDB Chicago and now at Search Party Music as the Executive Producer.

He has also directed award-winning TV commercials for Nike, as well as music videos for M. Ward, Cursive and Chin Up Chin Up. Currently living in Chicago, he performs/plays in the bands, Pulseprogamming and Riddenpaa, cooperates the independent record label, Fryk Beat and DJs in the crew, Silent Knights.

Professionally, he works from a music-centric POV and is a Creative/Production hybrid.

PJ Bloom is one of the top Music Supervisors in the Entertainment Industry. He has created and produced unique soundtracks for over fifty films, hundreds of television episodes, video games, advertisements and even amusement park thrill rides.

PJ has collaborated with such prolific filmmakers and television producers as Ryan Murphy, Steven Spielberg, Michael Mann, Jerry Bruckheimer, Ridley Scott and Mike Nichols while rendering his distinctive brand to nearly every studio and network in the Hollywood system and beyond.

PJ’s career soundtrack sales tally more than 50 million singles and 13 million albums worldwide. As the Music Supervisor for the entire groundbreaking Glee franchise, his work holds the record for most charted songs by a single act in Billboard Hot 100 chart history, surpassing Elvis Presley, The Beatles and James Brown.

PJ is also an award-winning Music Publisher. In 2009 PJ signed hip-hop act Far East Movement whose No. 1 single “Like A G6” and No. 7 single “Rocketeer” have sold over 13 million singles worldwide.

PJ speaks regularly around the country and the world on the subject of music in the visual arts and has been a club-level DJ for over 25-years.

Ann Kline earned a BA from UCLA and a JD from Southwestern University School of Law. She practiced law in the music department of the William Morris Agency before starting a career as a music supervisor. For the bulk of her career she ran the music department for John Wells Productions. In her position at JWP she supervised many television series’ including ER, The West Wing, Third Watch, and the feature films White Oleander, Nearing Grace and The Company Men. Outside of her work for JWP, she supervised the TV series Studio 60 on The Sunset Strip, Pan Am, Harry’s Law and A Gifted Man and worked on such films as 20 Dates, Suicide Kings, Jackie Brown and the recent release The Babymakers. Currently she is working as an independent music supervisor on Shameless, Under The Dome and the brand new Fox comedy Us & Them. Outside of music supervising, she has taught the UCLA extension class on Music Supervision.

Christian Mix-Linzer is the CEO and founder of Tracks & Fields, a music licensing and supervision service in Europe that finds and licenses campaign music for clients such as Audi, Porsche, Hyundai, Ebay, Google, Orange or McDonalds.

Rudy is uniquely positioned on both sides of the music supervision and pitching spectrum as both founding partner at Pusher, and veteran music supervisor at HTGR. Pusher is an exclusive collective of artists dedicated to disrupting the model of how music for motion picture advertising is created. Recent theatrical trailers that the Pusher crew has finished include Star Trek Into Darkness, Wolverine, World War Z, Django Unchained, 47 Ronin, Prometheus, Argo, Inception, The Hunger Games, and The Hunger Games: Catching Fire. Pusher continues developing its reach into other creative spaces, including video games, where Pusher has custom written and produced music featured in trailers to Assassin’s Creed 3, Watch Dogs, and Call Of Duty: Black Ops. Pusher has been fortunate to win several awards, including a Gold distinction at the Key Art Awards for Original Music, and a UKTI Britweek Business Innovation Award in Marketing & Communications.

At HTGR, Rudy has music supervised hundreds of episodes of television including the CSI franchise, Everybody Hates Chris, Entourage and much more. He recently completed the feature length documentary Waiting For Lightning about visionary skateboarder Danny Way. Current HTGR projects include CSI, Nikita, and new shows The Tomorrow People (CW) and Power (Starz), a modern NYC crime drama executive produced by 50 Cent. Rudy is passionate about emerging media and technology markets and their growing intersections with music, and continuing the endless pursuit of discovering dope new artists across the globe.

Space is limited, one slot per person please! Seating is limited and Synch Summit Sessions SELL OUT.