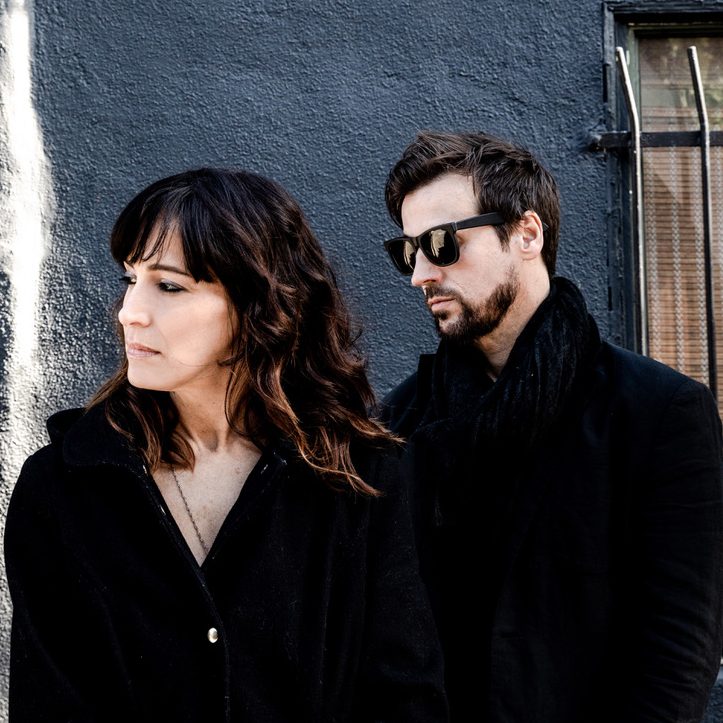 Love lasts through every season. It weathers the cold only to emerge stronger on the other side. It soaks up the sun and absorbs its radiance to the core. Every experience molds it, but never breaks it. After 22 years of marriage, award-winning singer, songwriter, and artist Chantal Kreviazuk and Our Lady Peace frontman, Raine Maida, did something they’d never done before, and they’ve done quite a bit. Chantal and Raine have left an indelible mark on popular culture. Raine founded and fronts platinum-selling alternative rock stalwarts Our Lady Peace and has garnered four Juno Awards. Meanwhile, Chantal has received a GRAMMY® Award and two Juno Awards and released eight critically acclaimed solo albums. Behind the scenes, they’ve penned hits for everyone from Kelly Clarkson to Carrie Underwood. In recognition of their contributions to charity and the arts, Raine and Chantal were both appointed to the Order of Canada in 2014.

For the first time in 2018, they packed up, kissed their three kids goodbye, and flew over 3,000 miles to the French island of Saint Pierre et Miquelon to make their first record together. They chronicled this 17-day trip in the upcoming 2021 documentary I’m Going To Break Your Heart and its accompanying soundtrack album. For as much as the film depicts the couple in the throes of an often tense and tough period of transformation, the music illustrates the strength of their harmony on tape as Moon Vs Sun and in real life.

“There’s a big message that comes from the music we’re creating,” says Chantal. “When you see the movie, you’ll see us being a regular couple annoying the shit out of each other. But, when we make music together, this beautiful thing happens. If we can conduct ourselves as harmoniously as we’re able to when we’re writing, there’s hope. In the beginning, love is a feeling, but it becomes an active practice. It’s a grind, but it’s worth it. To realize that to connect through conflict isn’t the end of us; but an opportunity was a big step in our understanding of our relationship. The music was the result of that connection.”

Chantal and Raine had wanted to do this for a long time, but the stars had never quite aligned. Over the years, Raine and Chantal had played music together at various benefits/shows. They even wrote the first song for what would become the album, “I Love It When You Make Me Beg,” late one night back in 2017. As Raine recalls, “That was one of the most inspiring pieces I’d ever written. From that moment, I knew we had to make a whole record.” With fond memories of a music festival where they performed together on Saint Pierre et Miquelon, they settled on the destination and packed vinyl for inspiration, including Joni Mitchell’s Blue, Leonard Cohen, PJ Harvey, and some old jazz. In order to stick to the plan, they needed to raise the stakes for recording—so they decided to film it.

Within five weeks of booking flights and hotels, the couple left their kids for the first time and set off on this journey accompanied by an entire crew.

“We needed more incentive,” admits Chantal. “If we were filming it, we had to get our act together. There was no excuse to bail. If we were thousands of miles away from home, we couldn’t just say, ‘Oh, we can’t shoot, because the kids have to go to the doctor’. We had other people we were responsible for.”

Holing up in a cozy apartment in the dead of winter, they got to work right away. Raine sat with a guitar in hand facing Chantal behind the keyboard as they wrote and recorded in real-time. It may have been frigid and icy outside, but the music recalls the warmth of a sixties summer in Laurel Canyon.

“There’s no way we would’ve ever made this type of record if we hadn’t put ourselves in that situation,” Raine observes. “We weren’t being interrupted, and there wasn’t anything to do besides thinking about what we were going to eat. Chantal and I were able to hyper focus, because all we had in the room were keyboards, a few guitars, and a little bit of recording gear. We’re comfortable enough in our own skin to talk about subjects other couples might not. It was very liberating to finally say things we might never say in real life. The music could only be made this way, because we’ve been together, gone through hardship, survived, and love each other more than ever after twenty-something years.”

The film recounts this process and follows Raine and Chantal as they reconnect. In between moments of extreme isolation and intense creation, it shadows them everywhere from author of Five-Minute Relationship Repair and psychologist Dr. John’s couch to a remote fishing village and back to Shangri-La Studios in Malibu where they put the finishing touches on the project.

The first single “St. Josephine” evinces the strength of their chemistry. The opening vocal resounds with the heft of a prayer before picking up the pace with dusty guitar, melodic piano, and harmonica. Their voices entwine as the chorus resounds with lyrics sung in French and English.

“The first time we visited the island, we went to a restaurant called St. Josephine,” remembers Chantal. “It was the sweetest little European bistro. On this trip, it was unfortunately closed because of winter! It’s a song of yearning and by the same token, St. Josephine is the patron saint of forgiveness which also seemed apropos.”

The title track “I’m Going To Break Your Heart” hinges on organic percussion, strings, and strains of soft piano. Lyrically, it encapsulates an overarching theme encased in the line, “And if it’s you, I’ll be a soldier ‘til it’s over then you break my heart.”

“It’s about how we made this commitment to be together until the end, but someone’s going to die first,” observes Raine. “So, a heart will be broken no matter how much you love someone.”

The opener “Who’s To Say” overturns outside perceptions and opinions when it comes to love. “When Raine and I fell in love, a few people said we weren’t a fit and would never make it,” Chantal goes on. “I find it laughable now.”

Then, there’s “I Can Change.” One of Raine’s personal favorites, the emotionally charged vocal call-and-response captures a breakthrough moment underpinned by cinematic chords.

“The feeling was, ‘I understand why this is happening now, why we’re here in this moment, and what I’m trying to do’,” he professes. “After years of Catholicism and growing up in a house where no one really said, ‘I love you’, everything came together. I had the opportunity to say it here. I don’t know if I would’ve wanted to say those things outside of this environment of safety with Chantal.”

In the end, they have found their music like never before as Moon Vs Sun.

“To me, this album is the bar, because it’s coming from such an authentic place,” Chantal leaves off. “It’s rare to write so honestly. This is how I always want to approach music though. It’s a reset. It’s the convergence of an end and a new beginning.”

“For me, it’s legacy,” Raine concludes. “If my kids or anybody else want to get to know me, this is the album to listen to.”