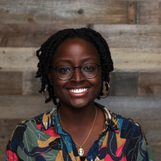 Mandisa Henry is the newest member of Yay Team, and is excited to bring her diverse experience to an already dynamic team. Prior to working in film, she spent several years in the consulting and non-profit sectors. After making the transition into the film industry, she spent the last several years as a production coordinator for a bi-coastal post-production sound studio, primarily focused on sound design, Foley, and re-recording for independent films and video games. While working in post production sound, Mandisa discovered her talent as a voice over artist and has since lent her voice to multiple projects including e-learning, radio, and advertising.

As someone passionate about film, Mandisa is also involved with a large regional film festival where she has been a Board Member since 2012, as well as a member of the Programming Committee.