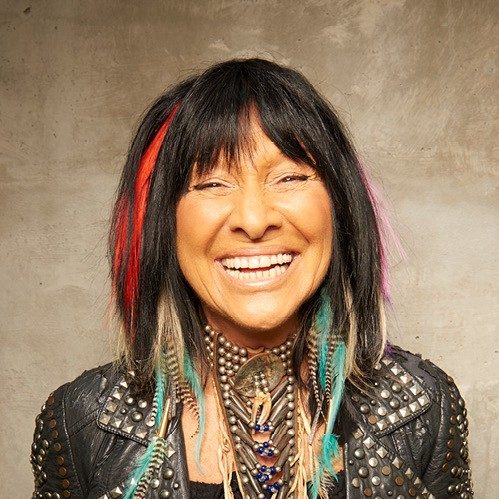 Buffy Sainte-Marie is touring constantly, and coming off her critically acclaimed, award-winning 2015 album Power in the Blood, nobody could ever accuse the Academy Award-winning songwriter of taking it easy. Since her groundbreaking debut, 1964’s It’s My Way!, the Cree singersongwriter has been a trailblazer and a tireless advocate, an innovative artist, and a disruptor of the status quo. Sainte-Marie has spent her whole life creating, and her artistry, humanitarian efforts, and Indigenous leadership have made her a unique force in the music industry. In 1969, she made one of the world’s first electronic vocal albums; in 1982 she became the only Indigenous person to win an Oscar; she spent five years on Sesame Street where she became the first woman to breastfeed on national television. She’s been blacklisted and silenced. She’s written pop standards sung and recorded by the likes of Janis Joplin, Elvis Presley, Donovan, Joe Cocker and Jennifer Warnes. She penned “Universal Soldier,” the definitive anti-war anthem of the 20th century. She is an icon who keeps one foot firmly planted on either side of the North American border, in the unsurrendered territories that comprise Canada and the USA. In 2017’s climate of damaging #fakenews and toxic hubris, Buffy Sainte-Marie’s incisive honesty, clarity, and intelligent compassion stand out in sharp relief. There’s still work to be done, and that work is Medicine Songs. The nineteen songs in this collection are about the environment, alternative conflict resolution, Indigenous realities, greed, and racketeering. It features a brand new politically charged rocker, “The War Racket,” that slinks and pounds as Sainte-Marie sing-speaks wisdom like, “You pretend it’s religion, like there’s no one to blame/ for the dead and impoverished in your little patriot game.” There are new recordings of some of the most insightful songs Buffy’s ever written, like the decades-spanning, rock ’n’ roll reportage “Bury My Heart at Wounded Knee,” or the first powwow rock song, “Starwalker,” an anthemic celebration of Indigenous leadership. There are timeless protest classics like “Universal Soldier,” “Now That the Buffalo’s Gone,” and “Little Wheel Spin and Spin,” as well as forgotten gems that were simply ahead of their time when first released, like the shimmery, eye-opening “Priests of the Golden Bull,” and the chillingly prescient “Disinformation.” But this isn’t an album of just protest songs. “Protest songs are good, they’re important, and they talk about a problem,” Sainte-Marie says. “But there are other activist songs which don’t have a label, but they can enlighten and liberate, inform, motivate or otherwise encourage solutions.” ‘Carry It On’ is like that. So is ‘You Got to Run,’ another new rocker and collaboration with acclaimed experimental vocalist Tanya Tagaq. ‘You Got To Run’ might be championing a marathon runner or an election candidate, charging through self-doubt to the real victory beyond the win. Sainte-Marie doesn’t sugarcoat the truth, nor does she shy away from hard realities, but Medicine Songs is never overwhelming or oppressive. Rather than making us feel smaller, sadder or more cynical, Buffy Sainte-Marie makes us feel stronger and more capable of seeing the world around us clearly. Part rhythmic healing, part trumpeting wakeup call, Medicine Songs is the soundtrack for the resistance. Medicine Songs will be released on November 10, 2017 via True North Records. For further information, high-resolution photography, interview and album review requests please contact: Stephen McGrath stephen@nightshopmedia.com Eric Alper eric@truenorthrecords.com