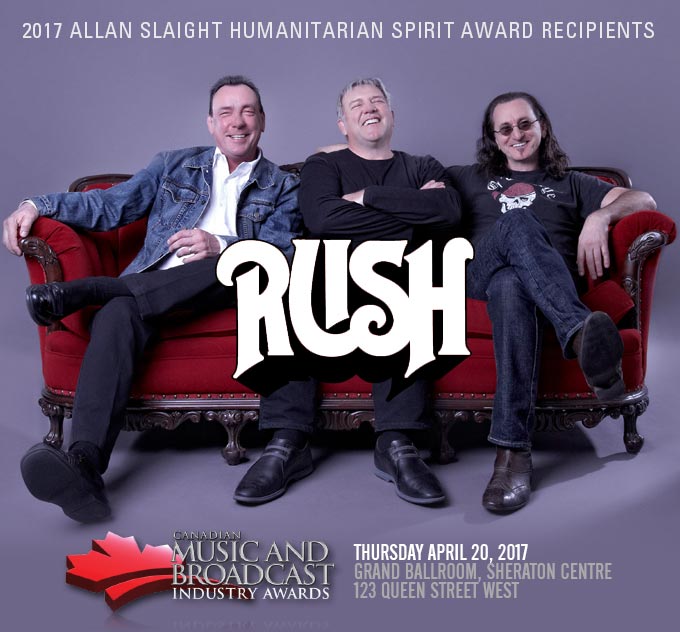 RUSH ANNOUNCED AS THE

Toronto, ON (November 2nd, 2016) — Canadian Music Week is pleased to announce RUSH – Geddy Lee, Alex Lifeson and Neil Peart – as the 2017 recipient of the Allan Slaight Humanitarian Spirit Award. The multi-platinum trio will be honoured for their achievements and longstanding career in the music industry, social activism and support of humanitarian causes at the annual Canadian Music & Broadcast Industry Awards Gala Dinner at the Sheraton Centre on Thursday, April 20th, 2017.

“We are so incredibly honoured to receive the Allan Slaight Humanitarian Spirit Award.  The depth of Allan and Gary Slaight’s generosity, consideration and benevolence has no measure.  We will strive to carry forward their spirit of charity and goodwill.” – RUSH

“My father Allan Slaight believes that giving back to one’s community is something we should all strive to do and the members of Rush have made a point of this throughout their career, starting with a United Way benefit-concert at Maple Leaf Gardens in the early ’80s when Allan was Chair of the Campaign,” said Gary Slaight, President and CEO Slaight Communications Inc. “In recent years, the group has raised money for food banks, Casey House, the Kidney Foundation, Doctors Without Borders, AIDS research; the list goes on. Alex, Geddy and Neil have been in my family’s rock’n’roll life since the early days when we started Q107 in the late 1970s, and it gives me real pleasure today to thank these three exemplary musicians, on behalf of the Slaight Family, in awarding them with the Allan Slaight Humanitarian Award. Good deeds deserve acknowledgement and this is one group that exemplifies the spirit of giving.”

“We are proud to be acknowledging Rush’s legacy with the Allan Slaight Humanitarian Spirit Award,” added Neill Dixon, President & CEO, Canadian Music Week. “We praise their spirit and determination in philanthropic and humanitarian causes, as their dedication to multiple charities and organizations is very inspirational. They have shown extraordinary support in social involvement and charitable causes, and we are excited to celebrate them at this year’s awards.”

With more than 40 million records sold worldwide and countless sold-out tours, Rush is not only one of the most inventive and compelling groups in rock history, they remain one of the most popular. According to the RIAA® Rush’s sales statistics place them third for the most consecutive gold/platinum studio albums by a rock band, topped only by the Beatles and the Rolling Stones. In addition to their consistent commercial success, Rush has also been recognized with nine JUNO Awards and seven Grammy nominations, including one for the acclaimed documentary “Rush: Beyond The Lighted Stage.” The group has remained unwaveringly committed and adventurous throughout their musical journey, and the same characteristics can be used to describe their charitable dedication.

Over the course of their four-decade-long career, the members of Rush have thrown their support behind a wide variety of worthy causes often privately and sometimes publicly. From their earliest shows at Toronto’s historic Maple Leaf Gardens, the band started working with the Toronto Food Bank to encourage fans to bring food for those in need. Eventually deciding to do their first charity concert at Maple Leaf Gardens to benefit the United Way in the early ‘80s, and an amFAR show to benefit Aids Research in the early ‘90s, engaging themselves and their fans in positive pursuits naturally became part of the Rush ethos.

As dedicated advocates of human rights, in 2008 Rush donated $100,000 from a Winnipeg concert’s gate to the Canadian Museum for Human Rights. In the same year, on their Snakes & Arrows Tour, the band donated $100,000 from their show in New Orleans to Brad Pitt’s Make It Right Foundation to assist in the revitalization of the city post Hurricane Katrina, and sponsor the construction of a house in The Lower Ninth Ward dubbed “The House that Rush Built.”

From their 2010 Time Machine Tour onwards, Rush has donated $1 from every concert ticket sold to various charities including Doctors Without Borders, a total which will soon surpass $2 million over these last five years. In 2013, the band performed an incredibly successful benefit concert at Red Deer’s Enmax Centrium with all proceeds going to the Canadian Red Cross to help victims of the flooding that devastated many regions of southern Alberta. The event raised more than $575,000 and was one of the largest donations made to the Alberta Flood Relief.

Rush has also been a passionate supporter of Little Kids Rock, a national non-profit organization that works to restore and revitalize music education programs in disadvantaged U.S. public schools. In efforts to provide percussion instruments to schools, the group created a premium Neil Peart Paragon Cymbal Pack, each of which came with a free splash cymbal personalized, autographed and dated by the Rush drummer himself. This cause-based marketing initiative went on to raise over $50,000 for Little Kids Rock. Working with their endorsement companies, they have set up partnerships for their signature items which have seen many positive charitable efforts such as Neil Peart with DW, Sabian and ProMark, where one campaign raised over $60,000 for Child Advocates. Alex Lifeson has donated royalties from his signature Alex Lifeson Les Paul Axcess guitar to the Domenic Troiano Foundation for guitar music scholarships.

The band members have also donated their time, funds and awareness through their personal interests and events. An avid baseball fan, Geddy Lee donated close to 400 baseballs signed by former Negro League baseball players from his personal collection to the Negro Leagues Baseball Museum in Kansas City in 2008. Alex Lifeson is a supporter of Casey House, as well The Kidney Foundation to which he donates his paintings that has led to almost $300,000 in funds raised. As part of their Brush For Hope campaign, Lifeson’s current painting, “Aquarium” is available for bids now until November 8th. During the band’s South American tour in 2010, Neil Peart was moved by the rescue of the trapped miners in Chile. When he wrote a story about his experiences touring in South America, he rallied Rush fans and his readers to make a $1 donation for his story. Neil matched their donations, and together they raised $10,000 for the Chilean Red Cross.

For more than 10 years, Geddy Lee has been an active board member for the Grapes for Humanity Canada charity, an organization that raises funds to benefit humanitarian causes around the world with the assistance of the international wine community. Geddy Lee and Alex Lifeson co-host their bi-annual “Grapes Under Pressure” wine event supporting the local wine growing regions of Ontario. All three members of the band support this cause through their Grapes Under Pressure eBay auction of Rush memorabilia. These combined events have raised over $500,000 to date.

As a band with over four decades of hits, Rush’s vast catalogue includes such classics as 1974’s self-titled debut, 1976’s 2112, 1981’s Moving Pictures, 1996’s Test For Echo, and 2002’s Vapor Trails. Rush released their 20th studio album, Clockwork Angels in 2012 via Anthem/Roadrunner Records. The critically acclaimed collection marks their first studio recording since 2007’s Snakes & Arrows, and debuted at #1 in Canada and #2 on the Billboard 200 matching the highest chart debut of the band’s career. Rush was inducted into the Canadian Music Hall of Fame in 1994, made an Officer of the Order of Canada in 1996 and inducted into the Songwriters Hall of Fame in 2010. They have received a star on both Canada’s Walk of Fame (1999) and Hollywood Walk of Fame (2010). Rush received the highest artistic honour in Canada by winning the Governor General’s Performing Arts Award in 2012 and was inducted into the Rock and Roll Hall of Fame in 2013.

Later this month, the band will be releasing a documentary from their recent R40 Tour, Rush Time Stand Still (Anthem/Ole/Universal). Narrated by Paul Rudd, the film documents the band and their 40 plus year relationship with their legions of loyal fans. The film Time Stand Still will premiere on November 3rd in Cineplex/Landmark theatres across Canada and Fathom in the US, then be released on BluRay/DVD on November 18th.

Each year, Slaight Comunications and Canadian Music Week awards an outstanding Canadian artist, in recognition of their contribution to social activism and support of humanitarian causes. In its 8th year, Rush will join the celebrated list of recipients which include: Sarah McLachlan, Chantal Kreviazuk & Raine Maida, Simple Plan, Bruce Cockburn, Bryan Adams and Nelly Furtado.

For more information on CMW and the 2017 CMBIA, contact: