MELISSA ETHERIDGE – TO SPEAK IN RARE ONE-ON-ONE AT CMW

On Saturday, March 12, Canadian Music Week will play host to one of rock’s most distinguished voices and personalities – Melissa Etheridge. In an exclusive in-depth celebrity interview at the Fairmont Royal York Hotel in Toronto, Etheridge will share her philosophies on music and discuss her life and times.

Melissa Etheridge exploded onto the rock scene in the 1989 with the release of her critically-acclaimed eponymous debut album which was four times platinum in Canada.  Etheridge’s popularity has been built around such memorable songs as “Bring Me Some Water” (from her debut), “No Souvenirs” (from Brave And Crazy) and “Ain’t It Heavy” (from Never Enough), for which she won her first Grammy for Best Female Rock Vocal. She hit her commercial and artistic stride with her fourth album, 1993’s Yes I Am, featuring the massive hits “I’m the Only One” and “Come to My Window,” a searing song of longing that brought her second Best Female Rock Grammy.  The album went six times platinum in the US, double platinum in Canada and spent more than two and a half years on the album chart. In 1995, Etheridge issued her highest charting album, Your Little Secret (#6 on the Billboard Top 200), which included the hit single, “I Want to Come Over.”

Her astounding success has been recognized with a Juno award for International Entertainer of the Year in 1990, the Songwriter of the Year honor at the ASCAP Pop Awards in 1996, and the Academy Award for Best Original Song for “I Need To Wake Up” in 2007.

Her 10th studio album Fearless Love released in April of this year expands on the multiple strengths that have made Etheridge one of the most beloved figures in rock. The album has struck a momentous chord around the world, including a Top Ten debut on the Billboard Top 200 US album chart. In support of the release, and prior to her interview at Canadian Music Week, she will be performing March 11th at Massey Hall in Toronto. 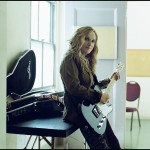