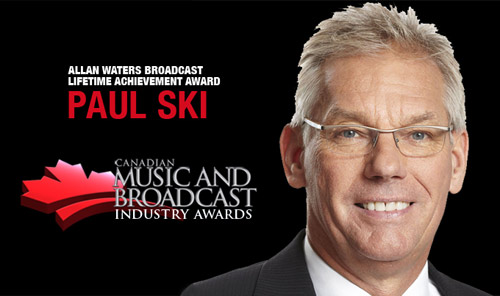 TORONTO, ON – (September 18, 2013) – Canadian Music Week is pleased to announce broadcasting veteran Paul Ski will be inducted into the Canadian Broadcast Industry Hall of Fame on Thursday, May 8, 2014. Ski’s achievements and longstanding career will be honoured with the Allan Waters Broadcast Lifetime Achievement Award in recognition of his outstanding success in broadcasting. The induction ceremony will take place during the Canadian Music & Broadcast Industry Awards gala being held in Toronto.

“Paul Ski was a leader and an innovator during his many years with CHUM,” said former CHUM Chairman, Jim Waters. “He played an integral roll in CHUM Radio’s growth and success. He is a most worthy recipient of the Allan Waters Broadcast Lifetime Achievement Award.”

“It’s an incredible honour to be recognized by my industry peers,” said Ski. “Over the past 30 years, I’ve had the privilege of working with some of the best in this business and am truly humbled to receive this prestigious award.”

An award-winning radio broadcaster, Paul Ski is an industry leader with more than 30 years of radio broadcasting experience. In 2008, he joined Rogers Media as Chief Executive Officer of its radio division, where he continues today, overseeing the company’s 55 radio stations across Canada.

Prior to this appointment, Ski served as President of CHUM’s radio division, playing a significant role in the company’s success and performance, and spent many years of his distinguished career in senior management roles.

Recognized among industry peers as a leader for his expertise in developing strategic plans to renew and brand successful radio stations, Ski has spoken extensively on this topic at numerous broadcast and industry events throughout North America. He holds a Masters in Business Administration from Simon Fraser University, focusing on strategic business management and research.

Ski currently serves as a member on the board of the Bureau of Broadcast Measurement (BBM) and Chair of the CAB CEO Radio Council, and continues to remain active in the broadcast industry and community associations.