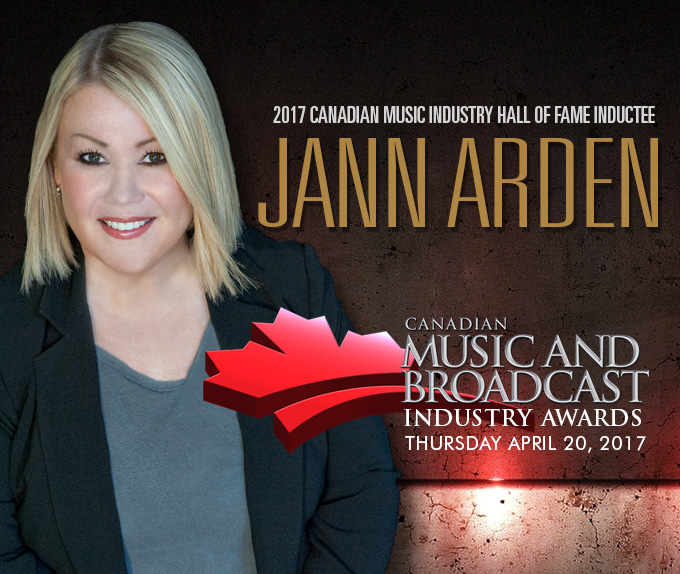 TORONTO, ON – (October 5, 2016) – Canadian Music Week is pleased to announce Jann Arden as the 2017 inductee to the Canadian Music Industry Hall of Fame. Jann will be honoured for her achievements and longstanding career in the music industry at the annual Canadian Music and Broadcast Industry Awards Gala Dinner in the Grand Ballroom at the Sheraton Centre on Thursday April 20, 2017.

“Jann Arden is an award-winning musician, best-selling author, TV host and one of Canada’s best-loved celebrities. With 13 albums to her credit, she is known for her artistic integrity, wit and humour as much as she is for her music. We are proud to have this award winning artist join the Hall of Fame alumni at Canadian Music Week,” says CMW President Neill Dixon.

“I’m beyond honoured to be inducted into the Canadian hall of fame. It has truly been an incredible privilege to be able to live a creative life and do so many amazing things for my friends and family. I look forward to many years ahead of doing the same – and continuing my work.” says Jann Arden.

Jann can bring a hall full of people to tears through song, only to have them, moments later, rolling in the aisles, through her off-the-cuff comedy. Whether she’s performing her music, hosting an event, or telling her deeply personal and affecting stories, Arden’s wisdom and wit shine in everything she does.

Calgary-born Arden catapulted onto the Canadian music scene in 1993, with the release of her debut album, Time For Mercy. To date, she boasts 19 top-10 singles, and has received eight Juno Awards, including “Female Artist of the Year” and “Songwriter of the Year.” She has also been recognized with 10 SOCAN Awards, four Western Canadian Music Awards, a Much Music Video Award, three Prairie Music Awards, and an Alberta Recording Industry Association Award. And the list goes on: she has been honoured with a star on Canada’s Walk of Fame, and inducted into the Canadian Association of Broadcasters Hall of Fame.

Multi-talented and versatile, Arden was the host of Being Jann on CBC Radio; she has been a judge on television’s Canada Sings, and has appeared on CBC TV’s Rick Mercer Report and in several sitcoms; she is also a returning co-host of CTV’s The Social; on stage, she was part of the cast for the Canadian tour of The Vagina Monologues. Her most recent album of original material is Everything Almost, released in the spring of 2014, which was followed in 2015 by her first seasonal album titled A Jann Arden Christmas.

Arden is the author of four books, including If I Knew, Don’t You Think I’d Tell You?; I’ll Tell You One Damn Thing and That’s All I Know; and Falling Backwards, the widely praised memoir of her life in rural Canada.

About the Canadian Music Industry Hall of Fame Awards

The Canadian Music Industry Hall of Fame awards were first presented at Canadian Music Week in 1989, inducting 42 recipients through the past 28 years, including Rush, The Guess Who, David Foster, and Alanis Morissette. Colin James, Tom Cochrane, Colin James, Triumph and April Wine, to name a few.