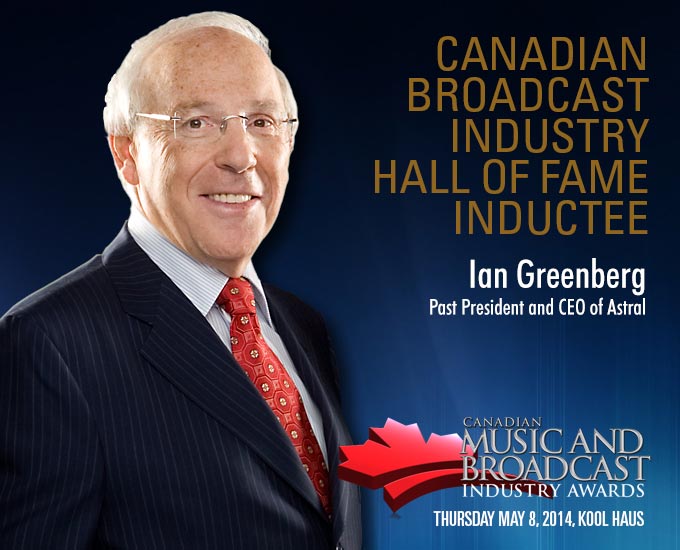 “I am deeply honoured to be inducted in the Canadian Broadcast Industry Hall of Fame and to be recognized by the industry I’ve dedicated my career to,” said Ian Greenberg. “I am very proud to be joining all of the remarkable men and women who have contributed to the Canadian broadcasting system – one of the world’s best and most diverse.”

One of four brothers who founded Astral, Greenberg played an integral part in Astral’s 50-year history by gradually transforming the company, from a photographic specialty business into one of Canada’s leaders in pay and specialty TV, radio, out-of-home advertising, and digital media. As President and Chief Executive Officer of Astral from 1995 until BCE’s acquisition in July 2013, Greenberg oversaw the company while it achieved 16 years of consecutive profitable growth. Greenberg has been a director of the BCE board since July 2013.

A Harvard Business School Advanced Management graduate, Greenberg is an active supporter of a number of industry and charitable associations. He and his brothers were awarded the Eleanor Roosevelt Humanities Award in 1993. In 2007, Greenberg received the prestigious Ted Rogers and Velma Rogers Graham Award for his unique contribution to the Canadian broadcasting system. He was inducted into the Canadian Association of Broadcasters’ Broadcasting Hall of Fame in 2008, and into the Canadian Business Hall of Fame in 2013.

To attend the Canadian Music and Broadcast Industry Awards or for additional details visit:

Canadian Music Week is Canada’s leading annual entertainment event dedicated to the expression and growth of the country’s music, media and entertainment industries.  Combining three information-intensive conferences; a trade exposition; a film festival; a comedy festival; four awards shows and the nation’s largest new music festival, CMW spans a five-day period from May 6 to May 10, 2014 at the Toronto Marriott Downtown Eaton Centre Hotel and over 60 downtown Toronto venues, attracting participants from across the globe.  For more information, visit www.cmw.net.
LINKS