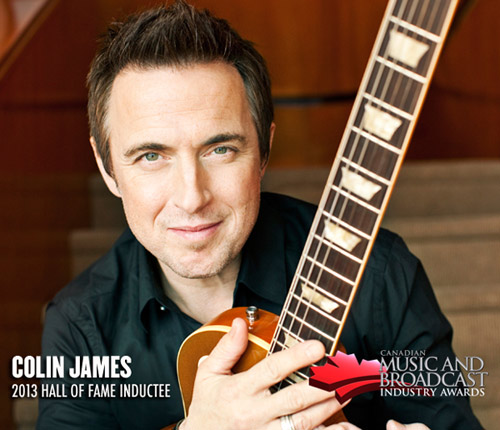 “You know an artist has a true gift when they can redefine an entire music genre and revolutionize a movement. Colin James has that,” said Neill Dixon, President of Canadian Music Week. “He injected what we commonly knew in the 80’s as pop rock with his incredible zeal for blues and immediately gained commercial adoration. He also single-handedly piloted the revival of swing in the 90’s with his uncanny adeptness for jazz standards. There are few artists who can do that and yet continue to be actively current today. He is an incredible musician whose talents deserve this Hall of Fame recognition and admiration from the industry.”

“It’s a real honour to be inducted into the Canadian Music Industry Hall of Fame,” remarked Colin James. “Receiving recognition for the work I love to do is always great – but to be acknowledged by the industry here in Canada is very special.”

In a career spanning 25 years, Colin James has topped the charts as a pop vocalist, recorded an acclaimed blues album and led the swing revival with his Little Big Band, which he both fronted and produced. He’s written memorable hit songs and recorded distinctive covers of timeless classics, all the while continuing to sell out shows from coast to coast. A Stevie Ray Vaughan protégé when he first broke onto the scene, James instantly gained prominence for his guitar prowess. He has since followed his own muse, traversing the genres of blues, rock, pop, swing and even gospel, becoming one of the most accomplished and well-rounded artists around. The release of his fifteenth album, Fifteen, earlier this year – a return to James’ full-blooded rock roots – is yet one more testament to his longevity and impressive career.

James’ 1988 self-titled debut, featuring his two self-penned hits “Voodoo Thing” and “Five Long Years,” was the fastest-selling album in Canadian history. It won him his first Juno and an opening spot on tour with Keith Richards. His second album, Sudden Stop, featured his hit “Just Came Back,” which reached #3 on the U.S. radio charts and earned him the Juno Award for “Single of the Year.” Colin was next credited with launching the swing revival, thanks to his wildly popular Little Big Band, which has released four successful albums to date.

A skilled performer, he has shared the stage with influential and guitar greats Bonnie Raitt, Lenny Kravitz, Albert King, Mavis Staples, Carlos Santana, Buddy Guy, Mick Fleetwood and The Chieftains; had his songs recorded by artists such as: Lucinda Williams, Johnny Halliday and Maria Muldaur; and won a staggering 16 Maple Blues Awards.

For media information and to arrange interviews, please contact: