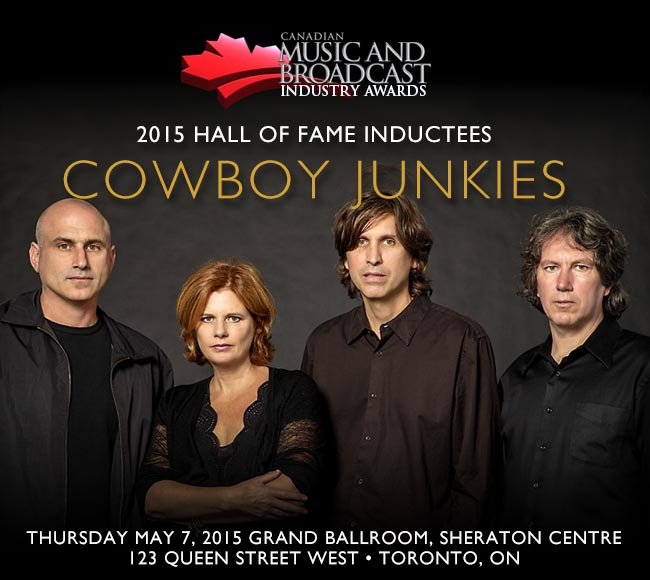 TORONTO, ON – (October 1, 2014) – Canadian Music Week is pleased to announce Cowboy Junkies as the 2015 inductees to the Canadian Music Industry Hall of Fame. One of Canada’s iconic alternative country/blues/folk rock bands, Cowboy Junkies have been producing their signature brand of roots music for more than three decades, simultaneously playing a seminal role in building the foundation of Canada’s independent music sector. On Thursday, May 7, 2015, their successes will be celebrated among their colleagues, collaborators and the industry at large at the Canadian Music and Broadcast Industry Awards gala taking place at the Sheraton Centre Toronto Hotel.

“It’s rare when a band comes onto the scene and takes the whole industry by storm,” said Neill Dixon, President of Canadian Music Week. “But Cowboy Junkies did just that. At a time when music was dominated by rock and pop, they transformed the landscape as we knew it – they defied genre and in the process created a new one. They broke down barriers, opening new doors for Canadian artists and in doing so, introduced the world to a fresh new Canadian sound. For that – for their ingenuity and their inspiration, we are proud to honour them with an induction to the Canadian Music Industry Hall of Fame.”

“We are very honoured and deeply grateful to Canadian Music Week for this induction to the Canadian Music Industry Hall of Fame,” said Cowboy Junkies’ Michael Timmins on behalf of the band.

With the release of their first album Whites Off Earth Now!! in 1986, Cowboy Junkies introduced a stunningly original sound to the Canadian music scene. In the 30 years since, the foursome – led by the brothers-and-sister team of Michael Timmins (guitars), Margo Timmins (vocals), and Peter Timmins (drums) and completed by Alan Anton (bass) – has gone on to sell over 5 million records worldwide, earn Double Platinum (Canada), Platinum (Canada & US) and Gold (Canada) certifications, tour endlessly throughout North America, the United Kingdom, Ireland, Holland, Germany, Japan and Australia, and earn international acclaim from critics and fans alike.

The Trinity Session, the group’s second and most influential release, has been lauded worldwide as a revolutionary game changer in popular music and credited for its role in defining the alt-country movement.  Recorded for $250 in a single 14-hour session in a Toronto church, its raw edgy sound propelled Cowboy Junkies to fame and lead the way for a vibrant alternative scene to emerge in Canada in the early ’90s. At a time when mainstream rock bands were dominating Canada’s domestic music scene, acts like Crash Test Dummies, Barenaked Ladies, Skydiggers, Moxy Früvous, the Rheostatics and Sarah McLachlan among others soon found opportunity in following their footsteps and turning strong grassroots popularity into national and international followings.

Cowboy Junkies have subsequently released 15 albums, including Trinity Revisited – a re-recording of their breakthrough album featuring guest artists Ryan Adams, Vic Chesnutt, Natalie Merchant and Jeff Bird. Their catalog includes such songs as “Misguided Angel,” “Sun Comes Up, It’s Tuesday Morning,” “Southern Rain,” “A Common Disaster”, “Anniversary Song,” “Angel Mine” and their infamous cover version of Lou Reed’s “Sweet Jane” – named one of the top 50 cover songs of all time by SPIN Magazine. Late last year the band produced The Kennedy Suite timed to coincide with the 50th anniversary of John Kennedy’s death. The project was mounted at the Winter Garden Theater and featured performances by Skydiggers, Sarah Harmer, Jason Collett, Lee Harvey Osmond, The Good Family, and Harlan Pepper among many others.

Admired worldwide for their live performance, Cowboy Junkies were the first Canadian band to appear on NBC-TV’s influential “Saturday Night Live”. They headlined New York’s historic CBGB, performed at the GRAMMYs on the Hill event in Washington honouring Congresswoman Mary Bono, and played at many more iconic venues including Carnegie Hall, Royal Albert Hall, Massey Hall, and with the Boston Pops at Symphony Hall. They have toured and shared the stage with the likes of John Prine, Sting, Townes van Zandt, Elvis Costello and the Toronto Symphony Orchestra while offering opening slots to a generation of new artists including Lucinda Williams, Fred Eaglesmith, Over the Rhine and The Skydiggers.

In 1981, Cowboy Junkies founded independent label Latent Recordings, which served as an outlet for releasing some of the band’s own projects as well as albums of other new Canadian artists. The label has issued releases from the critically acclaimed John Bottomley, Ivy Mairi, Skydiggers, Cootes Leland, The Good Family as well as Tom Wilson (recording under the pseudonym Lee Harvey Osmond) whose albums Michael has collaborated on and produced. 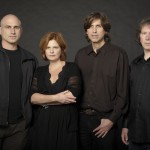 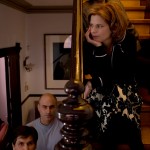