Alex Bird and the Jazz Mavericks

Alex Bird is a Jazz singer/songwriter in Toronto, ON. With a swinging style and an indescribable charm, Alex is currently working on an entirely new chapter in the Great American Songbook, with his newly released debut album, “Whisky Kisses” (Oct 23rd, 2020). The album is comprised of 11 new original songs. The title track was released in May of 2020 and was awarded Best Jazz Song at the World Songwriting Awards. “The Way She Moves” was released as a debut single in November of 2019. It was featured on All About Jazz as track of the day and was awarded the #1spot in reader favourites on Jazziz Magazine’s “Inside Track”.

“Whisky Kisses” has already had a great response. Reviews and airplay have come in from Canada, USA, Mexico, Spain, Belgium, Switzerland, Denmark, Russia, UK, and many others. Reviews are still coming in, including having the album picked up and distributed into stores all around Japan.

Alex Bird and the Jazz Mavericks were also just awarded a grant by Canada Council for the Arts to fully fund a second album. Due to be recorded and released in 2021, and comprised of 12 new originals.

In April of 2021, Alex joined Jazzcast.ca where he is the host of his own show entitled, “I’m Old Fashioned”, a weekly journey to the land of the crooners and torch singers, showcasing the lesser heard gems.

Alex literally grew up with the classics. As a young boy he was taken to hang around the Toronto Jazz scene, and had the opportunity to see and meet many of the greats along the way; Tony Bennett, Diana Krall, Ray Brown, Oscar Peterson, Mel Torme, Ray Charles…the list goes on. Without even knowing it, his musical training developed, sitting around at smoky Jazz clubs into the wee small hours of the morning.

With influences spanning from the 20s to the 70s, Alex Bird is a writer of incredible precision and lyrical depth. Working with a killer line up of young musicians, dubbed “The Jazz Mavericks”, they are pushing the boundaries of a beautiful tradition and bringing it into a new era. The Jazz Mavericks are rising stars in their own right. Ewen Farncombe on piano, Eric West on drums, and Scott Hunter on bass.

In between singing gigs, Alex also graces the screen with incredible charisma and talent. Alex studied classical theatre acting at George Brown, and film acting at Humber. Most recently, he appeared on CBC’s “Frankie Drake Mysteries” as Al Capone, and in September of 2019 Alex made his feature film debut in “IT: Chapter 2” alongside, Bill Hader.

Alex Bird isn’t a retro act. He has the ability to guide you through the darkest night and to open your eyes to possibility of love in a gridlocked street. He is heart breaking and full of spontaneous and improvised magic.

Welcome to the stylish and textured world that is ALEX BIRD.

“Every now and again, an act emerges from the cosmos and shakes up the planet. One of those groundbreaking bands is Alex Bird and the Jazz Mavericks. Bird and his group of talented players are rewriting the text book for vocal-infused Jazz. Joining the stable of contemporary jazz creators like Michael Bublé, John Pizzarelli and Esperanza Spalding, Bird proves to be every bit as talented and deft as his counterparts.” – Brian M. Owens at METRONOME MAGAZINE (USA)

“Some lazy journalists and singing fans are trying to say that Canadian vocalist Alex Bird is a rival to fellow Canuck Michael Buble’. Well, after listening to his smoking debut, that critique is like saying that Kamasi Washington is a rival to Kenny G! As my daughter once said about Buble’, “If I want to listen to Mel Torme’, I’ll put on Mel Torme’”. Buble’ is “safe”, where as the more dangerous Bird, on the other hand, is the word!
Bird’s writing, like his delivery, already has a completely underivative feel, with one foot in the tradition and the other in the dimly lit side streets.” – Jazz Weekly (USA)

“The slow-footed 3:52 (In the Morning) is a potential future classic. Whisky Kisses is a luscious, well-performed collection of originals that will appeal to fans of both ballads and up-tunes from the 1930s to the 1950s.” – Jeremy Isaac at JAZZ JOURNAL (UK)

“Crooners who not only sing in style according to classical etiquette, but also write their own lyrics are rather rare. Canadian Alex Bird is one of the few exceptions. In short, it is all there: The voice, the class, the sensuality and above all the feeling for both pathos and swing. Eleven songs that fit perfectly into the repetoire of “The Great American Songbook”. GEORGES TONLA BRIQUET at JAZZ’HALO (Belgium)

“I am somewhat skeptical about comparisons with the shadows of the great vocalists of the past. No, Alex Bird will not become the second Sinatra, although he works in the same stylistic field. He has already become the first Alex Bird, and if the trends outlined by Whisky Kisses continue in the future, this name will sound louder and louder.” – LEONID AUSKERN at JAZZ QUAD (Russia)

“Bird will captivate any listener with his sultry and mellow voice that has just that touch of smokiness which both manages to serve as a hark back to the era of golden jazz crooners like Sinatra and Bennett but also brings us into the present with a freshness that breathes new life into the traditional aspects of the genre. The influence of jazz bigwigs such as Bennett, Baker and Fitzgerald on the golden throated vocalist is apparent; Bird adds a distinct charm to his stylings while bringing that timeless classiness along into his new take on the past. Title track Whisky Kisses is a beautiful ballad that closes the album on a melancholic yet positive note, a sign that there’s much more to come from this astounding new talent.” – Kati Kiilaspea at THE WHOLE NOTE (Canada)

“Alex Bird, if you haven’t heard his name, you soon will. The Toronto based jazz singer just released his debut album, “Whisky Kisses.” Alex brings a modern twist to the classic crooners of days gone by. You can imagine yourself putting on the record, lighting a fire, and pouring yourself a drink. His intimate lyrics and smooth vocals immediately pulls you in. It’s an album you’re certain to play again and again.” – Bleu Bop (USA) 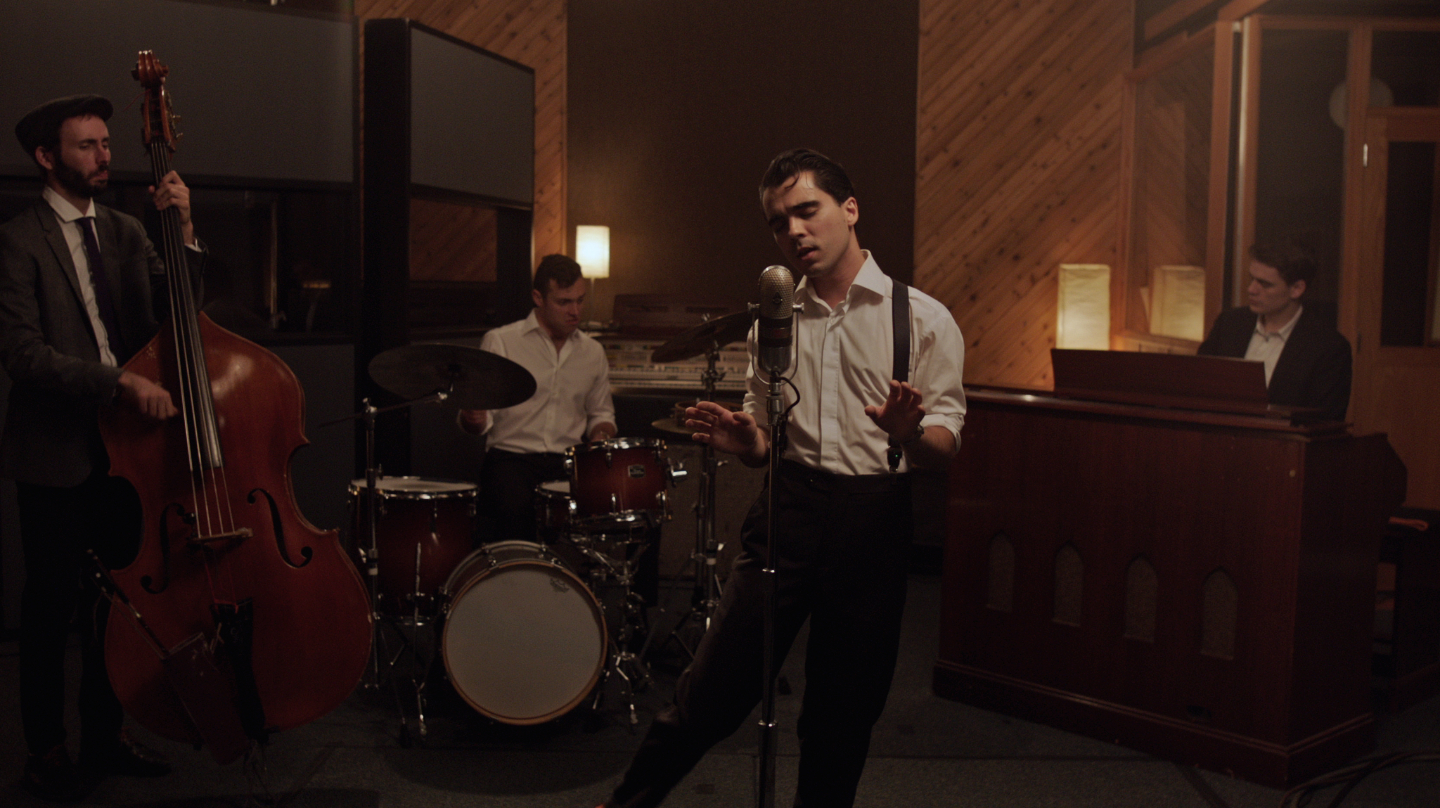 Alex Bird and the Jazz Mavericks