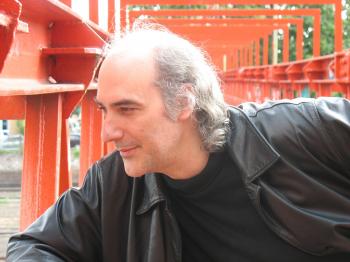 Recognized as a pioneering of the avant-garde fusion music in Argentina since the 80’s, Pedro Menendez continues to be one of the most innovative musicians proposing a different and modern South American concept rich in melodies, polirythm variations and elaborated counterpoints.

Virtuous multi-instrumentalist as well, he changes from the Piano to the Guitar, Winds and Bandoneon with dazzling ability.

He was born in Buenos Aires in 1957 and has been dedicated to the music since he was 7 years old.

He studied with professors like the worldwide known Oscar Aleman (Josephine Baker's jazz guitarist), Arturo Schneider (Astor Piazzolla´s flutist) and the contemporary classical guitarist Miguel Angel Girollet, among others. He also attended the Composition Career at the UCA.

He has recorded 17 discographic works with compositions of his own with the participation of well-known musicians like Osvaldo Fattoruso on drums (latin jazz Band 'Opa'), Rodolfo Mederos & Marcelo Nissinman on bandoneon, percussionist Rubén Rada, musicians from the Colón Theatre orchestra, among others.

He has composed incidental music for television, theatre and cinema (Argentina and the Munich School of Cinema).

In the field of contemporary chamber music, he has written several pieces including a concert for Vibraphone and Strings dedicated to the Argentinian Soloist Daniel Serale (premiered on the International Percussion Festival of Patagonia, Argentina, 2006), a concert for Marimba dedicated to the Mexican well-known Soloist Javier Nandayapa, a work of 20 pieces for Piano based on Latin American rythmics (‘Viaje por Latinoamérica’/Voyage through Latin America’ Book I / Book II) and a concert for Guitar and Orchestra.

Since 1986 he is the Artistic Director of Contemporaneo Art Music, an Argentinian Record Label dedicated to genres as tango, jazz, crossover, folk, world and contemporary classical music.

Todd S. Jenkins – All about jazz.com
“Wonderfully sensual evocations from South America.
Pedro Menendez is a multi-instrumentalist from
Argentina who has a fresh ear for blending the sounds of
different musics... Recommended.”

John Doll – Jazzreview.com
“His music is a whirlwind of the influences ranging from
Brazilian bossa nova, contemporary classical, tango,
Argentinian folk, and American jazz. The music is like a
gentle breeze on an otherwise warm still night in a
warm country very much like Argentina. Its rhythms
are graceful. It sways more than it swings. Menendez
tends to remain understated in making his point...
As is the rest of the album, it is simple
and wise, graceful and heartfelt.”