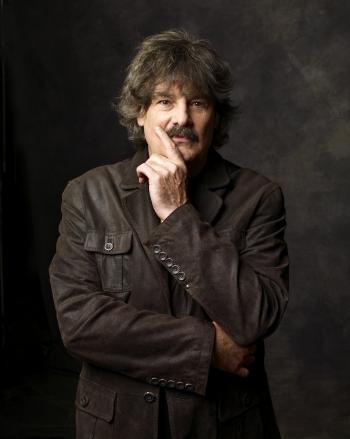 Burton Cummings has been forging his own way to rock for 40 years, weaving words into tapestries and songs into our hearts with that distinctive voice. Even now, as he looks back, not in anger, but with wisdom, clarity, and passion, Cummings continues to add to the soundtrack of our lives. Above The Ground, his eighth solo studio album and strongest since Dream Of A Child, is a collection of thoughtful observations and open emotions.

Just don’t call it a comeback album. Not that it’ll shake him. “I’ve been doing come back records since 1972.” He elaborates, “I’m always writing and recording; there are hundreds of songs that may never surface.”

The journey really took flight in 1968 with the release of Wheatfield Soul. That album launched the career of The Guess Who and changed the life of Burton Cummings forever, the ballad, These Eyes, giving Cummings and The Guess Who, their first of many top ten hits. But it was their fourth album together, American Women that solidified their place in rock history, as the title track became the first Canadian song to reach number one in the US. The b-side, No Sugar Tonight and second single, No Time were also big hits.

Even with a change in personnel, the hits kept coming as guitarist Kurt Winter filled Randy Bachman’s shoes as Cumming’s songwriting partner. Together, the two would pen such classics as Hand Me Down World Share The Land, Hang On to Your Life and Albert Flasher. During this period, Cummings and Winter also developed a lifelong friendship.

As all good things must end, by 1975, the band as a unit dissolved and Cummings set out on his own.

Right out of the gate with an eponymous debut, he established himself as a musical tour de force with the smash hit Stand Tall, an empowering anthem that struck a chord around the world. That song inadvertently set the course for his solo career.

“I didn’t choose this route,” he says, explaining the shift of focus from frenetic energy to powerful epics, going from straight up rocker to a more sensitive “guy with a piano.”

That “guy with a piano,” or as Robert Plant called him, “the lead singer with one hell of a voice,” continued to produce chart hits and gold albums, following Stand Tall with rollicking autobiographic, My Own Way To Rock, and what would become the best selling Canadian album at the time, Dream of A Child. Outlasting disco, punk and new wave, the Cummings hit parade marched on into the `80s with singles such as Fine State Of Affairs and You Saved My Soul.

His last studio album, 1990’s Plus Signs, was another success, spawning the poignant hit, Take One Away.

“Looking back I wouldn’t change too much.” He says, pointing that very few artist have had the opportunity to release 34 albums.

“For that I’m proud,” humbly encapsulating his career so far, “and that my work has legs, some enduring qualities that have lasted.”

The wall of gold and platinum albums is a testament to those enduring qualities that have inspired legions of fans; it is also a constant reminder that those same fans have high expectations, almost as high as Cummings himself. He is upfront and determined to put out the best album he can. “I cannot put out anything that will embarrass me. I’m not 19, I can’t sing about her ruby red lips.”

What he can and does sing about is life and coming to find one’s place in this seemingly hostile world. Straight ahead rocker We Just Came From The USA was penned from the perspective of a Canuck living in the US.

Splitting his time between his Los Angeles studio and his Winnipeg home keeps him grounded on both sides of the border. He has witnessed the best and worst of superstardom and at the end of the day, returning home, wiser and thankful about his place in the world as a person and as a Canadian.

“Every country has its problems, but overall we’re very, very lucky in Canada.”

The balance in the words, the comfort in his tone, resonate on Above The Ground because they come from experience and speak from the heart. His actions speak volumes; giving back to the community by investing in a regional restaurant franchise and supporting the heritage building that now bears his name, the Burton Cummings Theatre for The Performing Arts.

Writing all 19 tracks himself for the first time, Above The Ground represents yet another milestone in a career teeming with highlights. The expansive Above The Ground explores diverse and new territory and reveals paths previously traveled in secret, all the while remaining cohesive.

“There were way too many songs,” Cummings confesses. “But this time,” he beams, “I really pick the best collection I’ve ever had – this is my double album, my White Album.”

Like the White Album, Above The Ground comes at a point in Cummings life where he is comfortable letting it all out, sharing the good and the bad without prejudice.

Perhaps the album’s most touching moment for Cummings is the plaintively titled Kurt’s Song, a tribute to the late Kurt Winter, band mate and dear friend who passed away in 1997. The up-tempo beat and soaring solos, combined with the melancholy lyrics eloquently capture Winter’s spirit and illustrate the depth of emotion Cummings is able to mine.

“I still miss dearly,” sighs Cummings, the rich tone of his voice grows as talks about importance of friendship in life, and it’s impact. “That’s what spurred me onward to be overly conscious about how strong the lyrics have to be on this album.”

“A lot of awareness from experience has crept into the words,” he says. “I made it to sixty; I’m not nearly so guarded; I’ve got nothing to hide anymore.”

Burton Cummings is well aware of what it takes to succeed in pop music for over four decades.

“I have always had tunnel vision,” he explains. “I didn’t think about anything but captivating the crowd.” In case there was any doubt, he reiterates, “My one mission in life was to leave a lasting impression.”

What lasting impression has life left on Cummings? Humble and grateful, with an economy of words, he simply says, “I’m a very lucky guy, man.”

With nothing to hide or prove, except to himself, Burton Cummings lays it on the line and the result is pure rock and roll goodness, timeless melodies and stories that not only touch the heart, mind, and wheatfield soul.