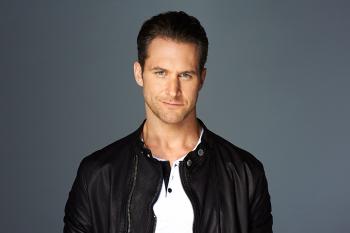 @mattawells
Matt Wells just might be the only music journalist who has recorded a song with Huey Lewis, interviewed Slayer before jumping on stage to open for them, and performed a Led Zeppelin song onstage with members of Van Halen. As the face of MuchMore, Matt combines his years of experience as a songwriter, performer, and actor to find a special connection with the thousands of musicians and celebrities he has come face to face with.

Born and raised in Newfoundland, Matt got his start in the broadcasting world as host/videographer in Halifax on MuchMusic’s GOING COASTAL, where he helped exposed fans to artists like Hot Hot Heat, Wintersleep, Matt Mays, and Feist, before they were thrust into mainstream consciousness. He also spent 11 years as the lead singer of the notorious hardcore metal band Bucket Truck who released four albums, 10 music videos, and performed to audiences
around the world before playing their final show in 2007.

After making the move to Toronto, Matt was nominated for a Gemini as host of the MuchMore Original Series WHERE YOU AT, BABY?! chasing down the most popular musicians of the ’80s and ’90s and entering their world. In WHERE YOU AT, BABY?!, Matt found himself fly fishing with Huey Lewis at his Montana Ranch, house hunting with Tiffany in Nashville, and hanging out with Ice T in New Jersey. Matt also got the opportunity to put his interview chops to the test at the 2010 Olympic Winter Games in Vancouver, as host of the ctvolympics.ca Digital Lounge where he interviewed Canada’s Olympic medal winners, and covered the Canada/Russia Men’s hockey game at Russia house wearing a Sidney Crosby jersey!

With well over 2,000 interviews under his belt, Matt has earned rave reviews for his insightful, well-researched approach. He’s interviewed a huge roster of iconic artists including Coldplay, Ozzy Osbourne, Slash, Gene Simmons, The Police, Mötley Crue, Metallica, Aerosmith, Soundgarden, No Doubt, Meatloaf, Lady Gaga, Guy Ritchie, Claire Danes, and Matt Damon, just to name a few! He also tackled the notoriously challenging Lou Reed who said his interview with Matt was one of his best he’s ever had, and went head to head with the infamous journalist-eater John Lydon, notorious frontman of the Sex Pistols. After a 45 minute interview with Matt, he remarked “that was alright”. Most recently during an interview with No Doubt for MuchMore’s Original Series IN SIXTY, Gwen Stefani sung Matt’s praises noting, “You are a really good interviewer how do you do it?”

Matt continues to bring music to the forefront of MuchMore interviewing artists for MUCHMORE MOMENTS, and counting down the best of the best in music past and present with THE TOP music video countdown series.

Wearing many hats, once a week, Matt also lends his pop-culture expertise to MTV as the host of MOVIE NIGHT. Matt also continues to act, write, record, and perform as one half of the roots/folk duo Lazybones.