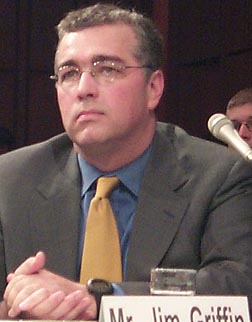 Managing Director,
Onehouse LLC
The Plains, VA, USA
Jim Griffin is Managing Director of OneHouse LLC, dedicated to the future of music and entertainment delivery, and works as a consultant to absorb uncertainty about the digital delivery of art.

Today, Jim is focused on accelerating the pace of scholarly research, especially through collaborative tools, sharing and open access to knowledge. He works with Mendeley, a UK company that is changing the world of research.

In addition to serving as an agent for constructive change in media and technology, he is an author, serving as a columnist for magazines, and is on the boards of companies and associations. Jim started and runs Choruss LLC, incubated by Warner Music Group. He started and ran for five years the technology department at Geffen Records. Prior to Geffen he was an International Representative for The Newspaper Guild in Washington, D.C.

While at Geffen, Jim led a team that in June of 1994 distributed the first full-length commercial song on-line, by Aerosmith. Geffen was the first entertainment company to install a web server, and Geffen World was one of the first corporate intranet sites. Geffen was named by Network World in 1996 as one of the world's top 25 technology companies, and one of only seven in the United States.

While at Warner, Jim led a team the Choruss team that successfully built a new model for sound recordings: Sharing music with flat-fee access to unlimited music downloads for college students..

Jim is co-founder of the Pho group. Named after a bowl of Vietnamese soup, Pho is an organization that meets for discussion-oriented meals in cities around the world, electronically linked by the Pho mailing list. Pho's many thousands of readers enjoy dialogue on the digital delivery of art and the new economy in music, movies, books and all media.

Jim testified in July 2000 before the Senate Judiciary Committee at its oversight hearing on file sharing and music licensing. He regularly moderates video and television shows on digital entertainment. He is often a keynote speaker or moderator at conferences (Internet Summit, Giga Conference, Comdex, CES, Webnoize, and many others) and lectures annually at business schools (Harvard, USC, UCLA, Berkeley). He also serves as an expert witness in digital entertainment, and has presented many Continuing Legal Education courses.

In addition to work with music, his expertise includes wireless work in Europe, including at Nokia's Research Center in Helsinki, Finland, and with numerous companies in Finland and throughout Europe. He's moderated numerous panels on wireless and given speeches on wireless issues around the world, ranging from music conferences to parliament meetings in Europe. He is a regular speaker at entertainment industry events and corporate and association meetings.