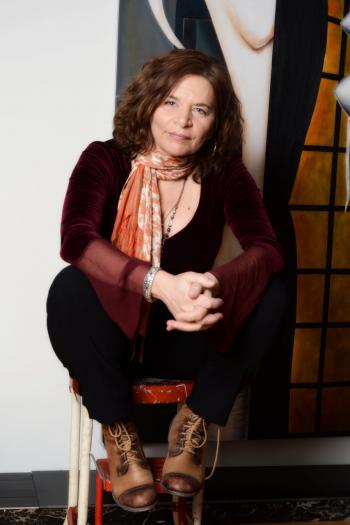 For the past 37 years Lorraine Segato has powered up an impressive artistic career that has produced some edgy and excellent cultural work. Segato's extensive experience as a respected, Songwriter, Musician, Filmmaker, Event Producer, Artistic Director, Speechwriter, and Social Justice Activist makes her one of Canada's respected cultural commentators and iconic recording artists.

As the co-founder and lead singer of The Parachute Club, one of the most critically lauded and commercially successful groups of the eighties, Segato enjoyed an impressive career in the music industry before turning her attention to a large array of diverse creative endeavours. Even before her chart topping hits with The Parachute Club, Segato had already staked a claim as one of the few female artists of the time able to succeed on her own terms.

Known as one of Canada's most internationally renowned early 80’s transcultural music bands, The Parachute Club garnered five Juno's, five BMAC’s, five Casby's, two Platinum and one Gold record and a SOCAN Classic award for the song Rise Up and recently honoured with the Indie Hall of Fame Award from CMW's Indie Music Awards. To this day, the group’s hits Rise Up, At the Feet of the Moon, and Love and Compassion and Love is Fire remain staples on Canadian radio. Segato has released several critically praised solo recordings, including Luminous City, Phoenix and Invincible Decency as well as having produced several eminent film music scores.

In 2001 Segato directed, wrote, narrated and music edited the TV and festival documentary Queen Street West-The Rebel Zone with the award-winning Rhombus Media International. Along with the film she executive produced an accompanying Sony Records soundtrack CD and won an award for most promising new female director at the Inside Out Film Festival.

Over the years Segato has alternated between music, directing, and producing large cultural events and in 2016 she curated her first cultural history Artifact Exhibit about Queen Street West’s storied history. From 2014- 2016 she was the Inaugural Artist in Residence at Toronto’s Regent Park and collaborated with award-winning film director Shelley Saywell on TVO’s Lowdown Tracks which featured the stories and talents of Toronto’s homeless street buskers. The film placed second as Audience Favourite at Hot Docs Festival and has continued to inspire audiences. Most recently she has directed the video for the 35th Anniversary special edition of Rise Up Redux and is set to launch a podcast series called Smolder featuring inspiring stories of older women. Plans for 2019 include a workshop launch of her one woman show Get Off My Dress as well as a stretch as guest artist contributor for the Institute for Change Leaders which seeks to bring creativity to social activism curriculum.

From her touching performance at Jack Layton’s funeral to her generous mentorship of young artists, Segato’s work, no matter what the medium, remains consistently topical and relevant. Her passion, empathy and charisma have served a career, on stage and in production, that has educated and inspired Canadians for close to four decades.