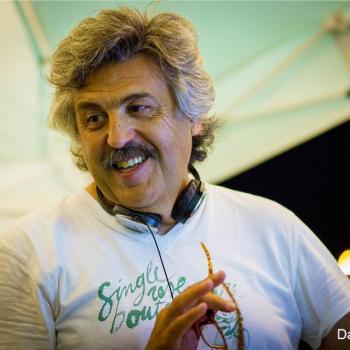 Following his college year’s passion for the link between “high” and pop culture, his very first contact with the live music biz dates back to the mid-Seventies, as he starts cooperating with the very first free radios in Milan, Radio Montestella and then Canale 96. In 1979 Claudio Trotta graduates at the Civica Scuola di Arte Drammatica as music operator, spending a training period at the Teatro alla Scala (Scala Theatre). Going through some TV experiences (TeleRadioMilano 2), he’s involved by Lucio Salvini (chairman at Ricordi by that time) in his Country e Folk Label project and becomes the Italian promoter for the artists in the roster. Later on, Salvini will entrust him with Artistic and Marketing Direction of the Blues & Rock Project series at Carosello Records. From here takes its origin the name BARLEY, as a homage Trotta pays to his first passion, Anglo-Saxon country and folk. As one of his latest personal side projects, Trotta edited The Milan Music Dictionary (1995) together with Paolo Zenoni; he teaches at Università degli Studi Milano-Bicocca and Civica Scuola di Musica in Milan, moreover he’s a radio speaker and has conceived several formats like Whole Trotta Love. In his first 35 years of Barley Arts he organised thousands live concerts so far, of Italian and International artists such as AC/DC, Queen, Kiss, Cure, Bruce Springsteen, Tom Waits, Frank Zappa, Lenny Kravitz, Van Morrison, Loreena McKennitt, Ray Charles, Norah Jones, Ry Cooder, Guns ‘n’ Roses, Aerosmith, Chemical Brothers, Mika, Deep Purple, Pearl Jam, Negramaro.

2005 is the year of the record breaker show in Campovolo produced for Ligabue, best selling live show ever for a single act with more than 170.000 attendance.

Through the years Trotta conceived quite a few festivals and reviews in many different music genres, like Monsters of Rock, Sonoria, Irlanda in Festa, Laghi Lombardi in festival, Milano Blues, Balkanika, Flippaut, DiversiSuoni al Conservatorio, Live Across and the food truck festival Streeat, now at its second edition. In addition, he produced family shows and edutainment events such as BBC’s Walking With Dinosaurs and Earth Concerts, Michael Flatley's Lord Of The Dance and musicals like We Will Rock You.

In 2014 Barley Arts has turned 35. This anniversary marks an impressive number of years spent in a successful way and with unprecedented longevity in the entertainment world. The big new challenge set to extend even further Barley Arts's reach is the birth of "Barley Arts Exhibition", an international division operating in the field of edutainment, a sector tied to the world of exhibitions. The first one promoted by Barley in Italy was Gateway To Space in Udine, which has been exported to Copenaghen, Prague and Istanbul. Goal! The Football Experience opened at Park Exhibition Centre in Moscow, now in Istanbul and soon in Johannesburg.