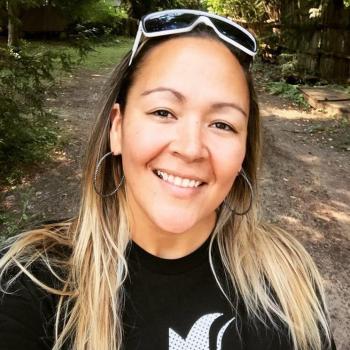 @forealpro
Christine Hunter; her inspiration, leadership and love of music is unparalleled.

Christine Hunter’s contributions to the entertainment industry in Canada have not gone unrecognized. She’s held down many pinnacle roles for some of Canada’s most prestigious music festivals, events and awards panels in the country. Her current role as the Director of Entertainment (Artist Relations, Marketing and Stages) at Shambhala Music Festival in Salmo, British Columbia has brought the festival to a world-recognized status.

She was brought up in the music industry surrounded by professionals and world-class performers for most of her life. She’s since completed post-secondary programs in Events and Convention Management and International Tourism and Hospitality Management at Holland College, PEI. It’s only been upward from there. Christine’s contributions, past and present, don’t allow for much down time. She’s connected to every aspect of any show or event she touches — contracts, schedules, transportation, volunteer coordination, FOH support, venue management, production management, hospitality, stage management and marketing. She’s also has curated panels and been a guest speaker at Canadian Music Week, served as a juror on five panels for Creative BC, the 2018, 2016, 2015 & 2013 Juno’s, 2013 & 2012 Kootenay Music Awards and the 2011 BC Music Awards.

Christine, in essence, is the full professional entertainment industry package with a wealth of knowledge and experience spanning over a seventeen-year career. She’s young, vibrant, and rest assured this is only the start of a life long career in the industry.