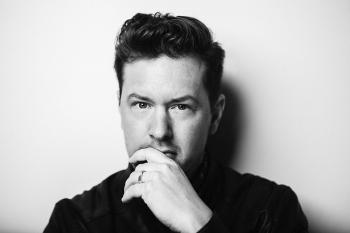 Composer/Producer,
Adrian Ellis
Hamilton, ON, Canada
Adrian is known for his inventive, story-driven, daring approaches to creating his scores. For his recent work on the single-take, split screen feature Last Call, he took up the challenge to record the score in single take, in front of a live audience. The resulting work was called “stirring” and the film moved a full house to a 2 minute standing ovation during its sold out L.A. premiere. For Timebox, he restricted himself to producing music made only of “found objects”, including power saws, parts from a 1930’s radio, and a “bowed” piano. Whether using field recordings, a solo piano, or a 60 piece orchestra, Adrian is always hunting for a sound that is as compelling and unique as the stories he is helping tell.

Passionately collaborative, he is most at home when working with storytellers, solving creative problems. His love of story analysis helps him uncover the right questions to ask of his creative partners, before a single note is written. Former VP of Music at Disney, Andy Hill, has described his music as “beautiful, mysterious… haunting…” and praised his “deft” scoring, calling him “ready for prime time”. Adrian is most drawn to visually rich dramas, thrillers, mysteries, and science fiction, where he can explore both the dark and transcendent sides of the human condition.

Born in Canada to a musical family, he grew up partly in Germany where his father found work playing French horn in the Wuppertal Sinfonieorchester. There, he was immersed in symphonic and operatic music, and began to learn of music’s narrative power. As a boy, he could often be found dressed up in home-made costumes, acting out imagined scenes from Holst’s The Planets. He would later go on to study fine art and classical guitar, laying the groundwork for his career as a musical storyteller.

With over 60 credits to his name, Adrian’s feature film work includes his hybrid score for The Scarehouse (NBC Universal), the dark orchestral Definition of Fear (directed by James F. Simpson (Merchant of Venice), starring Bollywood superstar Jacqueline Fernandez) and Taken Too Far, directed by Paul Lynch (Star Trek TNG/DS9). Television credits include themes for Daily Planet (Discovery), huge orchestral cues for The CFL and International Hockey (TSN), as well as music for Canada’s long running national morning show, Canada AM (CTV). He also works in the burgeoning world of web series, and is noted for the award winning scores for the hugely popular, two-time Canadian Screen Award nominated Out With Dad, and the sci-fi noir Haphead (Canal+).

Recently, Adrian has been cultivating a second passion: leading in-depth conversations with great musical storytellers. He’s had the opportunity to share the stage and chat with luminary composers such as Trevor Morris (Vikings), Robert Duncan (Castle/Timeless), as well as Oscar winners Mychael Danna (Life of Pi) and Hans Zimmer (Inception). He has developed and led panels for renowned festivals such as TIFF and Hot Docs, and organizations including The Canadian Film Center and The Directors Guild of Canada.

Adrian is the 1st Vice-President of the Screen Composers Guild of Canada, and an advocate of the value of screen music and the importance of the filmmaker/composer relationship.