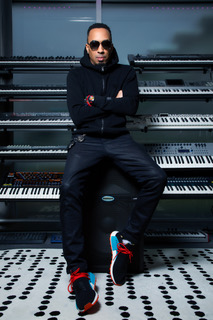 Everything paints a picture!
No matter what he does, GRAMMY® Award-winning producer, multi-instrumentalist, songwriter, entrepreneur, DJ, philanthropist, and film producer Dallas Austin always tells a story. His ability to place audiences inside of an everlasting moment cemented him as one of the most-celebrated creatives of the past two decades with over 50 Billboard Hot 100 smashes and 17 Top Tens to his credit and a multitude of awards.
Not only does he stand out as a 2019 inductee into the Songwriters Hall of Fame, but he has also been honored by Urban League of Atlanta at the “Equal Opportunity Day Dinner,” the 2018 Black Music Honors, The National Academy of Recording Arts & Sciences (NARAS) during the Annual Heroes Awards, and by the Georgia Music Hall of Fame as a 2006 inductee and 2011’s “Most Influential.” Additionally, he garnered a coveted GRAMMY® Award in the category of “Best R&B Album” and the “Beacon Award” from the Independent Media Artists of Georgia, Etc. (IMAGE). Austin will receive the Trailblazer in the Arts Award at the 2019 NBAF (National Black Arts Festival) Gala – Imagine Afrofuturism: A Celebration of Art through Technology.
However, everything comes back to a knack for sharing an identifiable narrative developed at the onset of his illustrious career.
“At an early age, somebody told me ‘a song is the recording of the event that just happened to you’,” he explains. “That’s why they called it ‘a record.’ This idea always resonated with me from the beginning. Great songs really come from the standpoint of truth.”
He started pursuing that truth as a child in Columbus, GA. Surrounded by music, mom owned a nightclub and restaurant, while his stepdad played guitar for James Brown. Picking up guitar, keyboard, and drums himself, he laughs, “I looked at Prince and thought everybody is supposed to play everything, so I tried to.” At 13-years-old, he decided to move to Atlanta in order to become a producer. His mother sold the business and followed.
Dallas landed his first placement with “Cover Girl” for Princess & Starbreeze in 1987, and it opened up the floodgates. From “Unpretty” and “Cool” to “Mowtownphilly” and “FourFiveSeconds,” he went on to craft era-defining hits for the likes of Another Bad Creation, Boyz II Men, TLC, Madonna, Gwen Stefani, and most recently Cedric Gervais, Kodie Shane, Klondie Blonde, and many others in addition to collaborations with Michael Jackson, Duran Duran, Lionel Ritchie, Nathalie Cole and Sia.
At the same time, he left an indelible imprint on the world of film. He produced a pair of successful features based on his own experiences growing up in eighties Georgia—the 2002 Drumline and 2006 ATL. Total gross for both totaled $100 million-plus worldwide, and Dallas made history in the process. While paying homage to Atlanta culture “in a way audiences hadn’t seen yet,” he encouraged the passage of a Georgia tax incentive for production in the “Peach State.” He spoke on behalf of the state at the 2001 White House summit and appeared at the ribbon cutting once the bill passed. The state’s economy would dramatically benefit as the site of various films, resulting in gross receipts in the billions and counting.
Dallas also emerged as an in-demand DJ, along the way. He regularly performs gigs around the globe, touching down in Ibiza, Tokyo, Mykonos, London, Nice, Montenegro, St. Tropez, and beyond and spinning fierce sets at events for the Super Bowl, Victoria’s Secret, and more. It all set the stage for his forthcoming DJ debut—due out Spring 2019. The project will feature vocals and toplines from some of music’s hottest names.
“DJ-ing keeps me in tune with where music is going and gives me a chance to enjoy other people’s records for a change,” he goes on. “It’s a great way to tap into a fresh energy and remain current, which is why I love it.”
Outside of all things music, his entrepreneurial profile continues to grow. The Rowdy apparel brand - The Rowdy Collection - which he founded—has gone on strong for over two decades. Meanwhile, his philanthropic organization, The Dallas Austin Foundation, implements music education programs and builds studios in public schools.
Ultimately, Dallas Austin’s own story keeps getting more and more interesting by the day.
“Regardless of what it is, I want to create things that resonate with people and bring positivity,” he leaves off. “Creating music, film, and art is the best way for me to help others and really do some good.”