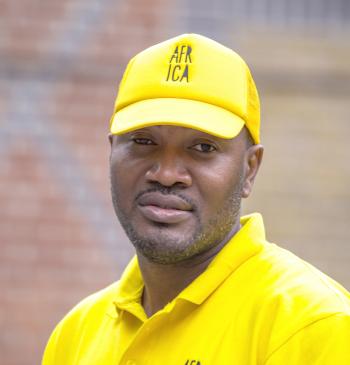 Founder,
AIM Nation
Toronto, ON, Canada
When you meet Julz Ossom, you discover quickly why he’s garnered a well-known reputation as a modern day renaissance man within the African music scene. A business marketing strategist, entrepreneur, consultant & advisor in the creative culture of African music, Ossom has earned the respect of who’s-who in the artistic, social and political landscapes of Canada for his vision.

Originally from Ghana, West Africa, Ossomsharpened his music industry chops early on as a popular Afrobeat radio DJ. From that growth, he founded Ghanamixtapes.com in 2003 as a labour of love, but which exponentially grew to be the pioneering digital platform for African mixtapeculture online. The site to this day serves as a milestone for new, up and coming and established African music artists looking to reach audiencesnear and wide, with thousands of hits monthly.

In cementing himself as the 21st century authority in Afrobeat’s global evolution, Ossom continues to broaden his goals from his home in Toronto, Canada through partnerships with the City’sculture Initiatives. In 2013, he founded The African Invasion Movement (AIM, Africa In Me), an inclusive worldwide brand and social marketing campaign created to promote the “African Lifestyle” while influencing positive change around the world; Non-for-profit organization AIM to Impact, focussed on artist development for African music professionals in Canada; Clothing By AIM, a brand focussed fashion line with profits going to charitable efforts around the world; Additionally, African Music Week (AMW). Heading into its 5th year, it is the only music conference in the country that specifically exhibits the billion-dollar African music industry and business (which is right after Canadian Music Week in June every year). Julz’s “aims” and influence are second to none – celebrity endorsed, critically acclaimed and also tapped to represent the overall wealth of Africa’s role in Canada’s diversity,

Julz Ossom is truly a rare visionary with a bold focus—to advocate a worldwide awareness of the New Africa. It’s no surprise that his name has become synonymous with African Empowerment through Entertainment --both globally and here in Canada… and there’s bound to be even more fromhim because of it.

African Music Week (AMW)
was created by the AIM 2 Impact non-profit organization to heighten the understanding of African music through a series of concentrated events in one of the world’s most diverse and multicultural cities.

Our vision for 2019, adding more innovative and interactive engagement of African sounds and lifestyle on a future tip to our audiences. The vastness of African music genre permeates pop culture fashion, music, dance and language are a few examples of where its influence can be seen.
As a collective, we are distinctly inspired by the global citizenship that represents life in Ontario and in Canada – as seen in the many cultures that co-exist here and that same citizenship’s appreciation of the arts. To this, It’s clear to us that music translates regardless of culture which is an important aspect of our vision to broaden awareness to all people regardless of race, culture or creed. Each individual in Aim2Impact has single handedly seen the trend in favour of the rhythmic music culture of the new Africa and the Diaspora, touching broader audiences in our city and across Canada. African Music Week (AMW) is an opportunity for cultural exchange in celebrating Africa’s uniqueness in an uplifting modern setting. As a brand, we want to ensure that in the delivery of AMW to local audiences and the world, the richness of the New Africa lifestyle in contemporary Canada is presented at it’s best.
• Enhance the interactive AIM Conference and Afrobeats Festival
• Increase international awareness
• Increase high profile performances while maintaining a platform for emerging artists to be seen • New, stronger alliances with AMW – city support behind initiatives
• New Media partners