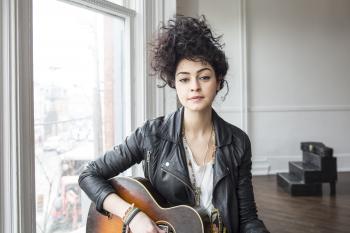 Hill Kourkoutis is an artist, producer, songwriter, composer, musician and director who works out of her studio, The Lair.

As a songwriter, her songs have been recorded by Poesy (Big Machine), Meghan Patrick (Warner), SATE, Graph, The Cliks and Mookie and the Loyalists (Sony), to name a few. She has also composed for Cadillac, The Adventures of Napkin Man (CBC), Paper Girls (Fablevision) and "Blowback" (2018). Her songs have also appeared in television shows and films such as Kimâ€™s Convenience (CBC), Degrassi: The Next Generation (MuchMusic/MTV), Killjoys (Space/Syfy), Offspring (Network Ten), Pulling Strings (Film), as well as ads for Urban Planet and Virgin Mobile.

As a musician, Kourkoutis has had the honour of playing with artists such as Serena Ryder, The Weeknd, Danny Michel, Martha and the Muffins and Tara Slone and can be seen on the CTV series, The Launch, performing the duties of guitarist in the show's house band.