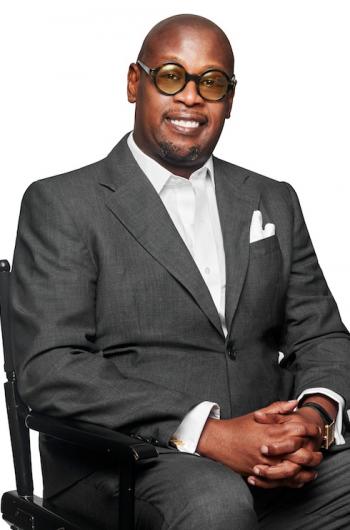 Vice Chairman,
REVOLT Media & TV
Los Angeles, CA, USA
Andre Harrell serves as Vice Chairman of REVOLT Media & TV, a post he assumed in 2014 after being appointed by REVOLT Chairman Sean Combs. An entertainment powerhouse with credentials spanning film, television, music and branding, Harrell has helped influence and create urban and Millennial culture around the world. In this role, Harrell oversees the REVOLT Music Conference (RMC), now in its fourth year, which welcomes 70+ speakers and hosted 800 attendees during October in Miami Beach, FL. In his role, Harrell also creates new opportunities for REVOLT with technology companies, brands, and the music industry, as well as helps reinforce the network’s position as the #1 name in music, largely focusing on business development, music television specials, and strategic partnerships.

For four decades, Harrell has been one of the leading entertainment entrepreneurs and cultural ambassadors of our time – as a member of the early 80s pioneer rap duo Dr. Jeckyll and Mr. Hyde; a film and television producer; founder of Uptown Records; Chairman of Motown Records; and founder of Nu America advertising agency.

With the founding of Uptown Records and Management, Harrell launched the careers of not only Mary J. Blige, Heavy D and the Boyz, Father M.C., Jodeci, Al B. Sure, Anthony Hamilton, The Lost Boyz, Teddy Riley and Guy, but also mentored the hip-hop mogul Sean "Puffy" Combs. Known to have the midas touch when it came to discovering and developing talent, Harrell was responsible for changing the sound of R&B music and crossing artist and executives over into what was then known as "pop culture". By the end of 1994, Billboard Magazine ranked Uptown second amongst all the major labels for the number of charted R&B singles and fifth for the number of R&B charted albums.

While serving as the chairman of Uptown Records, Harrell also created and produced “New York Undercover,” the first multicultural major network television drama ever, starring Malik Yoba, Michael DeLorenzo, and Lauren Velez. He also simultaneously executive produced STRICTLY BUSINESS, famous for being one of the first films to showcase the socio-economic diversity among African Americans, starring Halle Berry in her first leading role.

In 1995 Harrell became the president and CEO of Motown Records. During his five-year tenure, he not only oversaw the careers of Stevie Wonder, Diana Ross, and Queen Latifah but also launched the careers of Mario Winans and 98 Degrees, and is credited for increasing the scale of executive compensation for black music executives throughout the industry.

After leaving Motown, Harrell became president of Bad Boy Records overseeing the careers of Puff Daddy, Faith Evans, 112 and breaking new artist like Black Rob, Shyne Po, The Dream, and Carl Thomas. While at Motown, Harrell worked with Bono and Bobby Shriver to introduce the (RED) campaign for HIV/AIDs awareness among the urban market in addition to producing Urban Aid for LifeBeat at Madison Square Garden, a benefit concert televised on BET and MTV.

Harrell founded Nu America Records and launched the career of one of today's leading vocalists and chart-toppers, Robin Thicke. After four decades, having a hit record in each, Harrell continues to have his hand on the pulse of music, recently executive producing the biggest single in the history of radio with Robin Thicke and Pharrell's "Blurred Lines," the most played radio song in 2013.

As part of his Nu America vision, Harrell produced the hit movie HONEY where once again he launched the career of another famous actress, Jessica Alba, by casting her in her first starring role. Harrell also produced and appeared in the MTV hit reality series “Making the Band.”
[conference-panels year="2020" type="overview" cat=2 testing=0 site=CMW]