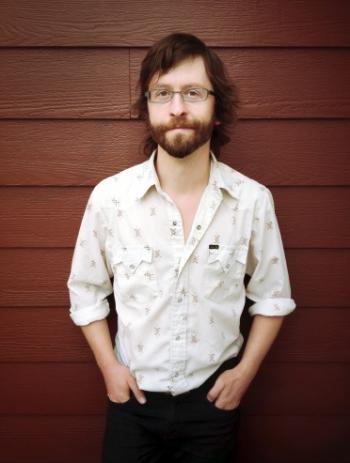 Performer/Composer/Producer,
Fond of Tigers
BC, Canada
JUNO Award-winning multi-instrumentalist/composer Stephen Lyons’ iconoclastic work is at the forefront of Vancouver’s creative music scene. Known mainly for his simultaneously visceral and intellectual output in the seven-piece avant-rock group, Fond of Tigers, Lyons is also a noted improviser, producer, and presenter of creative music.

The Georgia Straight recently named Fond of Tigers’ Continent & Western one of the 50 albums that shaped 50 years of Vancouver music. Downbeat Magazine included Fond of Tigers’ 2017 album Uninhabit in their annual Best-of, calling it a “masterpiece”.

He has produced or co-produced four Fond of Tigers albums, Limbs of the Stars’ heartwarmongering, Books & Branches’ Caribou Whispers, Parkland’s Affiliates: 1, and French for Sled Dogs and Cloudsplitter’s self-titled debuts. With the inter-disciplinary group Sun Belt, Lyons collaborated on an album, 168-page work of fiction, and faux-museum installation for the fictional town of Cabalcor, where the work is set. He is featured in Louisville, KY filmmaker Colin Garcia’s Nimbi, which explores both the studio world of Fond of Tigers and the industrial zones of Vancouver. He is also featured in Bleeding Daylight, a Parkland concert film/documentary by Shawn Bachynski and Mark Halliday (Moonrider Productions), to be released in Fall, 2018.

He runs a record label, Offseason, which has released 10 albums. Increasingly, Offseason acts as an umbrella for a variety of arts activities and releases, including a book, a film, live concerts, and art shows. Upcoming projects include a photo-documentation/soundwalk event that explores shifting urban land use, gentrification, and underground arts spaces. Lyons has collaborated with Colin Stetson, Mats Gustafsson, Sandro Perri, Bob Wiseman, and Rob Wright (of NoMeansNo). He currently has 126 titles registered with SOCAN.