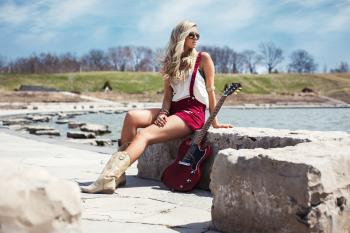 Artist,
Lindsay Broughton
Brooklin, ON, Canada
For Lindsay Broughton, Country Music is home. It’s the quiet, country house, white picket fence, and the rocking chair on the porch. Not a surprising association, as she was raised with music as a constant companion throughout her childhood in Brooklin, Ontario. Throughout her life, no matter what changes head her way, music has always been there for her.

Initially gaining inspiration from her performing mother, as soon as Lindsay was old enough she began performing. She became well and truly bit by the bug in high school, where she learned the guitar and joined the local songwriting club. As part of a field trip, she went to the capital of Country music itself, Nashville, where even then her potential was noticed. Arriving back to Brooklin, encouraged by the praise received in Nashville, she was more determined than ever to hone her craft and pursue a career in music.

And pursue it she did. Upon first releasing a selection of her own songs on the internet, she was approached by Brian Hetherman of Curve Music, who was taken with her raw talent and limitless potential. A deal was eventually struck and the doors were opened wide for Lindsay to begin her crash course in the music industry.

What followed is a lengthy list of accomplishments that many musicians, if they’re lucky, take over a decade to acquire, but for Lindsay’s obvious talent, passion, and determined drive, it was a matter of only a few years. In just a short amount of time, she has already been featured as a SOCAN artist of the month, appeared in various songwriting magazines, has had eight songs featured in the hit CBC show Heartland, has won a 2013 Country Music Association of Ontario Rising Star Award, and has had her songs covered by multiple artists…all before the release of her debut album.

Lindsay has also proven her mettle with a long list of live performing credentials. She has been a regular at the famous Boots & Hearts festival, has played at many CCMA showcases as well as the CMAO Awards show, and has shared the stage with some of country’s heavy hitters such as Chad Brownlee, Emerson Drive and Gord Bamford and In 2015 Lindsay was nominated as a CCMA Rising Star.

Through the guidance of Managment, the collaboration with Producers Joel Feeney and Kevin Savigar as well as fellow talented songwriters such as Josh Osborne (Kenny Chesney, The Band Perry) and Trevor Rosen (Jake Owen, Dierks Bentley and Keith Urban), and her own determination, she has elevated herself to the top of people’s list of artists to watch out for.


Her most recent full length album and the result of multiple years worth of development, field experience, and sheer grit, Take Me There, was released in November 2014, and the album, like all of her works, is pulled from real life experiences, but focuses on the cycle we have all gone through at some point; love, loss, and redemption. The single challenges the listener to think back to the moments in their lives that made them the happiest. It’s a toe-tapping, gritty, up-tempo song that encourages you to roll the car window down, relax, and to say “bring it on” to whatever lies ahead.

Lindsay will have a brand new single and album in 2016, and will be hitting the road once again.