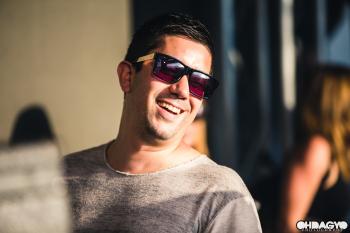 “My two older sisters took me to my first festival—Lollapalooza 1994—when I was twelve-years-old,” he recalls. “I was blown away at the energy and magnitude of the festival culture. In the back of my mind, I knew I’d love to eventually be involved in music one day in some capacity.”

Fast forward a few years later, the British Columbia native discovered electronic music, and it became something he followed religiously. Upon graduating from Centre for Arts
& Technology – Kelowna in 2009, he entered the world of concert promotion, cutting his
teeth by working with Canadian festivals such as Centre of Gravity and Shambhala. During his work in the festival world, he crossed paths with an old family friend who was an aspiring young talented producer. The conversation about working together began at that point and upon entering uncharted territory together, Saad began managing the artist Datsik.

Saad guided him from the dubstep underground to international renown as a genre pioneer. Datsik would go on to build a rabid worldwide fan base, performing at Coachella, Tomorrowland, Electric Daisy Carnival Las Vegas, Ultra Music Festival, Stereosonic, Electric Zoo, Identity Tour and more within the first few years as well as being sought out for collaborations and remixes by legends such as Snoop Dogg, Korn, Wu-Tang Clan, and Linkin Park. He would also oversee all logistics and marketing for numerous major cross-country North American tours.

“The key is to always be proactive,” he explains. “I try to think about what may lie ahead down the road, being as rational as possible, and considering all options. A willingness to take on many smaller roles early in my career helped me foster the success of my artists. Whether it was setting up sound to lighting or tour managing, I felt it was all necessary. It’s important to understand every aspect of the business at the same time while seeing the big picture.”

In 2013, he traded Kelowna for Los Angeles, putting down roots in the music mecca of the United States. By the end of that year, industry powerhouses Deckstar Management would welcome him as one of their own.

Now, he continues to expand his own repertoire with other business ventures, keeping an eye open for other opportunities within the industry. Still, it all relies on the same approach for Saad.

“I’m in honest in everything I do,” he leaves off. “The artist and project’s best interest is always in mind, and I’m constantly looking ahead.”