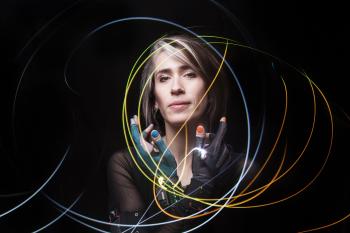 Singer/Songwriter,
Imogen Heap
London, UK
Self-produced, independent, engaged, she blurs the boundaries between pure art form and creative entrepreneurship. Heap has always communicated and collaborated with her loyal following (currently she has over 2.2m twitter followers alone) both on and oﬄine in pioneering ways. This has included fans contributing sounds, words and ideas through her inventive Listening Chair project for example or taking on a whole city in China for her song Xizi She Knows.

Her graceful tunes such as signature track Hide & Seek populate movies and TV shows, accompany dance and theatre performances and more recently, have been sampled by a whole new generation of young rappers and producers. On the more commercial end and being an 'artistąs artist', Heap has penned songs for and with Taylor Swift, Britney Spears, Mika and Josh Groban among others.

Her Mimu Gloves project a cutting edge experimental gestural music ware developed initially for Imogen’s studio and stage work was premiered at TEDU Global 2011 and since has attracted worldwide interest from the New Scientist, BBC tv and radio, Wired, Dezeen, Mashable.. the list goes on. Now Heap can be found collaborating and supporting new Mimu glovers' who range from pop starlet Ariana Grande to the the leading UK charity working in music, disability and technology, Drake Music. Other technology projects have included a generative and reactive music jogging app, explorations in 3D sound with leading engineers and technologists and Arboreal Lightning, a sound and movement reactive LED tree spanning over 1.5km!

In August 2014 Imogen curated and headlined a 4 day festival of contemporary classical music with heavy leanings in technology, bursting with installations to inspire at London’s iconic Roundhouse Camden.

Heap’s albums have been nominated 4 times for Grammys winning her one for engineering, an Ivor Novello award, The Pioneer award in 2015 from the Artist and Manager awards and recently another Grammy for her contribution to Taylor Swift’s album 1989.

Imogen has now added to her roles. Mum, as her little girl Scout was born in November 2014 on her living room floor. True to form of Imogen’s creative character to draw from and experiment with whatever may be going on around her at the time, Scout is the percussionist on Tiny Human, the first song after her birth.

To release Tiny Human, Imogen started to think on how the music industry could be improved in the wake of blockchain technology and smart contracts. So in her spare time, Imogen’s been speaking and meeting up mostly about what she calls ‘Mycelia’ - A foundation from which to create, champion and maintain the ethical, technological and commercial standards required to run a fair trade music industry.

Heap’s currently working on the music for the Harry Potter and The Cursed Child, theatre production. J.K Rowling's next story in the series is opening at the Palace Theatre in London’s West End, May 2016.

In 2017, you may see Imogen in a town near you as she’s planning her much awaited next World
Tour!