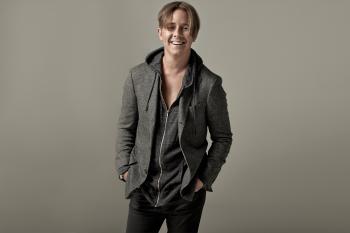 DJ/Producer,
Alpine Mastering
Toronto, ON, Canada
Multi-talented, multi-tasking, focused and ambitious, Glenn Morrison is the archetype of the modern DJ/producer star. The 29-year-old Toronto native is as happy rocking an un- derground house party as he is performing at an exclusive oceanic rooftop venue; as adept at composing an international club anthem like ‘Contact’ as he is at concocting a pop dance record that strikes to the Billboard Charts in America. His single ‘Goodbye’ has been Certified Platinum and went Number 1 for 11 weeks in a row on the Canadian Artists Billboard Chart, as well as going Number 1 in Russia’s Billboard Charts.!

Glenn has enjoyed the support of DJs as varied as John Digweed and Richie Hawtin to David Guetta and Tiesto. For three years he was resident at the world's best club, Ibiza’s Amnesia Club, and was a resident at Space in Ibiza for 1 year, as well as Space in Miami for 2 years. Last year, Glenn added the latest addition to his residency reper- toire in his monthly night being held in Las Vegas at the acclaimed Moon Nightclub at the Palms Casino. His label Morrison Recordings has put out 118 releases and count- ing, his Sequence Radio podcast series gets 12,000 downloads a month and is broad- cast on XM and Sirius Radio in North America, and most recently he signed to Sony Music ATV as a writer and producer. He’s produced and/or remixed for legendary bands
& acts such as Queen, Lady Antebellum, the Pet Shop Boys, New Order, Cher, Johnny Reid, Imagine Dragons, Moby, and the B52s. And he is perfecting a sinuous, hooky sound that combines the eerie beauty of pure techno with light rains of melody and flashes of emotion.!

In short, Glenn Morrison is one of the most dynamic and accomplished talents in elec- tronic music today. Period.!

But whether it’s producing music or playing it, versatility and passion are at the heart of what Glenn Morrison does. Above all it’s about connecting with the audience. “I love be- ing able to elicit emotion in people,” he says.!

Morrison is a difficult DJ to pigeonhole and that’s what makes him such a fascinating talent. One minute his sound is ruthlessly minimal and funky; the next it’s washed in color and vocals and emotion.!

Glenn has had an unusual career path. He started off as a classical pianist, a preteen prodigy, performing – and winning – competitions. Then came a life-changing en- counter with electronic music.!

He discovered classic mixes by DJs like Sasha and John Digweed on the Global Un- derground series, got lost in Adam Beyer’s Drumcode techno mixtapes, tripped out to Paul Oakenfold’s Goa mixes – and started buying records.!

When DJing offers started to come in, Glenn Morrison took them. He would play any- where, sleeping on promoters’ floors in smaller cities in Brazil, Norway, China and East- ern Europe, soaking up the vibe. “It was a great learning experience to play in the club; no one can teach you. And I wanted to completely saturate myself.”!

And as a classical pianist, the move into production came naturally. He worked with fel- low Canadian producer Deadmau5, then struck out alone. Everything changed in 2007 with the release of his hit ‘Contact’, an emotional, yet minimal trance record with shivers of delicious melody and a crisp, funky beat that left no dance-floor unturned. Tiësto put it on a compilation and it shot to the top of the World Dance Charts.!

‘No Sudden Moves’ followed: a driving, progressive house number with compulsively funky beats galvanized by shards of metallic melody. It too topped the World Dance Charts. Glenn Morrison had arrived. He studied law at the University of Toronto and had a place to study an MBA at Harvard. But post graduate education was going to have to wait.!

As a DJ, Glenn Morrison is now a major draw on the world circuit. He has played over
400 events worldwide in the last four years and has developed into a consummate DJ performer. “I love being able to play with people’s feelings, to build the night,” he says. “For me it’s about creating an experience. Starting at ten o’clock and then building the intensity.”!

He is a relaxed, grounded character, driven to create. And he is as versatile a DJ as he is a producer. He will tease the crowd with minimalist deep house, throw them into rap- tures with his inventively twisted techno deconstruction of Queen’s ‘Bohemian Rhap- sody’, then lighten the mood with a fluffier vocal number. “When I’m performing I feel great if others are overwhelmed by the show,” he says. “It’s more than a party to me but an audio-visual marriage, synchronizing the beauty of electronic music with that of an advanced light show. It’s not about the DJ as a DJ anymore but the DJ as a concert ex- perience.”!

Fresh, contemporary DJ stars like Glenn Morrison know that making your own records is the way to stay in the game. And he continues to produce: recent tracks like the big room stadium sound ‘Marquee’ or the lusciously emotional vocal number ‘Mine and Yours’ capture feelings and paint pictures with sound.!

Production continues apace in the new mastering studio Morrison has built in Toronto, entitled Alpine Mastering (www.alpinemastering.com). Be it sound design for video game companies like Nintendo, EA Sports, Activision or Rockstar, or his own produc- tions, he simply doesn’t stop making and playing music. His latest partnership with IMAX has been a thrilling experience, pushing the boundaries of electronic music to that of sound-scoring live theatre visuals. Glenn & IMAX unveiled this concept with a 3 part show series at the 2012 ComicCon event held at the Ruben H Fleet Science Centre in San Diego, and it was a huge success. “It’s been a liberating transition for me to make music for all different stylistic purposes, and I’m very grateful for having the ability to do what I love for a living” says Glenn.!

Alpine Mastering is yet another animal borne out of Glenn’s desire to entrench himself deeper into the industries tentacles. It is a high end mastering studio with the finest au- dio gear on the planet, and he offers a tailor made boutique approach to bespoke records through his ghost writing services, all the way to mixing and mastering services for international clients and world renowned record labels.!

I had the luxury to hear a preview of his track ‘Love Lost’, composed after a break-up with a girlfriend, and it is a tantalizing taster. It is an exquisite solo piano piece that sounds like the theme to a classy, romantic movie scene. Deceptively simple, without drums or electronic trickery, ‘Love Lost’ is a glimpse of the creative ambition yet to be realized. Watch this brilliant artist over the course of 2014 as he will be reshaping and redefining how we perceive electronic music through an ample amount of live shows, performances, and recordings.!