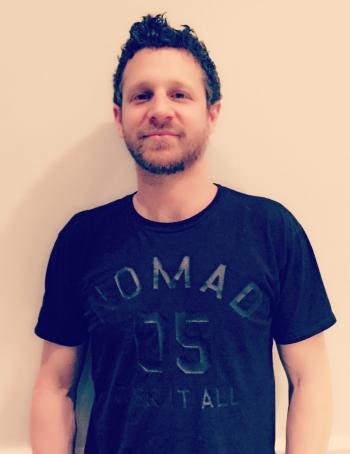 Partner/Creative Director,
The Eggplant Stereo
Toronto, ON, Canada
Adam Damelin is has a degree in Music Technology from NYU, and began his career ten years ago with Onda Productions in New York City. He is a Partner/Producer at The Eggplant Collective, and in 2012 led Eggplant’s expansion into publishing and licensing with the launch of The Eggplant Stereo, which provides award-winning music supervision and licensing, custom composition, and represents some of the best independent music available for placements in television, film, advertising and interactive media.
As a composer/producer, Adam has provided the score and sound design for Activision’s Operation Kingfish – a short film for the Call of Duty franchise, and The Basketball Game for the NFB. His music has appeared in a variety of television series such as Design Squad and Gourmet Escapes shown throughout North America and Europe. Over the years, Damelin has produced, composed and written music for hundreds of brands including, Gatorade, Corona, Nissan, Target, Kraft, Volkswagon and Ketel One.


At The Eggplant Stereo, we conceptualize, supervise and deliver exceptional music for film, television, video games and advertising.

Our a la carte services include a comprehensive and insightful team of expert music supervisors, world-class award winning composers, a diverse, intuitive and highly curated one-stop production library with stems, an outstanding one-stop indie artist catalogue, and well established label/publisher partnerships which allow us to easily clear almost anything we require.
Our composers have hundreds of credits and many awards, and include Trevor Morris (The Tudors, The Pillars of the Earth, The Borgias, Olympus Has Fallen), Sean Baillie (Hell’s Kitchen, Ultimate Fighter, American Chopper, Dirty Jobs), Steve D'Angelo (The Fifth Estate, The Bridge, Curious George, Rocket Monkeys) and Terry Tompkins (Thomas & Friends, Harry and His Bucket Full of Dinosaurs, The Land Before Time, Word Girl).    As one of the premiere commercial audio production companies in Canada, we work with the top brands and agencies including Leo Burnett, JWT, FCB, Blammo Worldwide, Cossette and MacLaren McCann.

We are always delighted to connect with supervisors, creatives, producers and executives to explore projects and process as well as any services we might be able to provide.