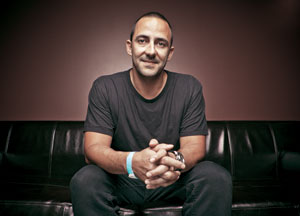 Director,
Blueprint/CONTACT Festival
Vancouver, BC, Canada
Alvaro Prol, Director of Blueprint, has established himself in his 16-year history as the industry leader in promoting and electronic talent buying in Canada. Planting his roots early on as a regular club-goer with a passion for music and musical talent, Prol developed the desire to promote musical acts and help talented musicians to reach their potential. In 1997, Prol launched Blueprint Events and has since grown to push the boundaries of western Canada’s entertainment scene, throwing some of the largest and most talked about shows, and bringing in the most sought after musical talent, including Deamau5, Avicii, Skrillex, David Guetta and all of the largest dance acts currently touring.

Among his career milestones, Prol has spearheaded several record-breaking events, and 35 and counting arena, convention centre and stadium shows. Starting with his first arena event featuring Deadmau5 at Thunderbird Stadium in 2009, Prol also hosted the first electronic music show at the Vancouver Convention Centre featuring Armin Van Buuren, in addition to the first successful all-ages music event featuring Calvin Harris at the PNE Forum, in 2010. During the 2010 Olympics, Prol’s Blueprint Events hosted a furious 27 music events in 17 days. In 2012, Prol launched the CONTACT Winter Music Festival at BC Place, the largest dance music festival on the west coast, growing in 2013 to span over two nights and culminate in 23,000 eager attendants.

After a long strategic partnership with The Adelphia Management Group, in 2013 Blueprint Events merged with the organization to become ‘This is Blueprint’, BC’s primary entertainment, events and lifestyle powerhouse. Along with Prol’s expertise, Blueprint and its partners own and operate 13 businesses including 5 nightclubs, 4 bars, 3 liquor stores and a catering company, in addition to running a music department of 4 talented buyers driven to execute over 300+ concerts a year.

Serving as a key influencer behind the evolution of western Canada’s entertainment scene, Prol has grown from an impassioned individual, to a reputable figure in the international music industry, and leader of a high powered entertainment mammoth that is known worldwide by a loyal following of class act fans and supporters for creating unforgettable experiences.