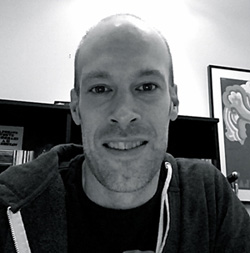 He then moved to London in 1997 where he joined the electronic music scene and co-founded the collective / monthly party Moon Palace, a Sunday chill out session where musicians from all horizons came to DJ in the afternoon (3pm to midnight).

Strong of a great experience in organising parties and events in London, Joss moved to New York in 2001 where he joined the circuit of bars and clubs and founded monthly music gathering Bazaar, where left field musicians of the alternative scene came to perform around very eclectic DJ sets.

Back to Paris in 2003, he worked in advertising (DDB Paris) and took the position of Music supervisor in one of France’s most awarded agencies. In 2006, he left to pursue a freelance career as Music Supervisor where he worked on different projects for a wide variety of advertising companies both in France and the UK.

He arrived in Montreal in 2008 to join production studio, Audio Z, where he worked as Musical Director. Then was recruited by Groupe Archambault (now Select Music) to start a new Synch department. He has been with Select Music since 2011.

Since he moved to Canada, he has worked on many major brands’ advertising campaigns, licensing and promoting both local and international music. He worked on campaigns for brands like Bud Light, Rona, Nissan, Home Sense, Toyota, Diet Coke, Danone, Ubisoft, Bristol Meyer Squibb, Videotron, Rogers, Sico, Le Château, Powerade, to name a few.

Joss also began working on movie productions in 2011 with several short films and documentary assignments. This led to getting full supervision responsibilities on feature films.

As a sideline to Music Supervision, Joss also produces original scores and sound effects, as well as directing actors in the studio for video games (Rails to Gold, Origins: Elders of Time, Legacy: Tribes of Wawaloo).