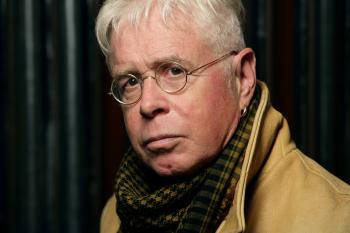 Bruce Cockburn has always been a restless spirit. Over the course of four decades, the celebrated Canadian artist has travelled to the corners of the earth out of humanitarian concerns—often to trouble spots experiencing events that have led to some of his most memorable songs. Going up against chaos, even if it involves grave risks, can be necessary to get closer to the truth.

“My mother once said that I must have a death wish, always going to what she called ‘those awful places,’” laughs Cockburn. “I don’t think of it that way. I make these trips partly because I want to see things for myself and partly out of my own sense of adventure.”

Small Source of Comfort, Cockburn’s 31st album, is his latest adventurous collection of songs of romance, protest and spiritual discovery. The album, primarily acoustic yet rhythmically savvy, is rich in Cockburn’s characteristic blend of folk, blues, jazz and rock. As usual, many of the new compositions come from his travels and spending time in places like San Francisco and Brooklyn to the Canadian Forces base in Kandahar, Afghanistan, jotting down his typically detailed observations about the human experience.

“Each One Lost” and “Comets of Kandahar,” one of five instrumentals on the album, stem from a trip Cockburn made to war-torn Afghanistan in 2009. The elegiac “Each One Lost” was written after Cockburn witnessed a ceremony honouring two young Canadian Forces soldiers who had been killed that day and whose coffins were being flown back to Canada. It was, recalls Cockburn, “one of the saddest and most moving scenes I’ve been privileged to witness.”

“Here come the dead boys, moving slowly past the pipes and prayers and strained commanding voices,” Cockburn sings solemnly on “Each One Lost.” Over a mournful accordion, the simple chorus sums up the gravity of the hymn-like song: “each one lost is a vital part of you and me.”

In contrast, one light-hearted number reflects Cockburn’s frequently underappreciated sense of humour. “Called Me Back” is a comic reflection on the frustrations of waiting for a return phone call that never comes. Meanwhile, listeners are bound to be intrigued by “Call Me Rose,” written from the point of view of disgraced former U.S. president Richard Nixon, who receives a chance at redemption after being reincarnated as a single mother living in a housing project with two children.

Brooklyn-based violinist Jenny Scheinman is one of Bruce’s two female collaborators on Small Source of Comfort. Scheinman, best known for her work with Bill Frisell and Norah Jones, provides some thrilling flourishes to instrumentals like “Lois on the Autobahn” and the bluesy, gypsy-like swing of “Comets of Kandahar,” a track that Cockburn describes as “Django meets John Lee Hooker.”

Produced by longtime associate Colin Linden, the album also features Annabelle Chvostek, a Montreal-based singer-songwriter with whom Cockburn wrote two songs on which they also harmonize: the introspective “Driving Away” and the driving, freewheeling “Boundless.” In addition to newcomers Scheinman and Chvostek, Small Source of Comfort includes such regular Cockburn accompanists as bassist Jon Dymond, drummer Gary Craig and producer Linden, who also plays guitar.

As always, there’s a spiritual side to Cockburn’s latest collection, best reflected on the closing “Gifts,” a song written in 1968 and but recorded here for the first time, and “The Iris of the World,” which opens the album. The latter includes the humorously rueful line, “I’m good at catching rainbows, not so good at catching trout.”
That admission serves as a useful metaphor for Cockburn’s approach to songwriting. “As you go through life, it’s like taking a hike alongside a river,” he explains. “Your eye catches little things that flash in the water, various stones and flotsam. I’m a bit of a packrat when it comes to saving these reflections. And, occasionally, a few of them make their way into songs.”

Those songs, along with his humanitarian work, have brought Cockburn a long list of honours, including 13 Juno Awards, an induction into the Canadian Music Hall of Fame, a Governor General’s Performing Arts Award and several international awards. In 1982, he was made a Member of the Order of Canada and was promoted to Officer in 2002. Last year, the Luminato festival honoured Cockburn’s extensive songbook with a tribute concert featuring such varied guests as jazz guitarist Michael Occhipinti, folk-rapper Buck 65, country rockers Blackie and The Rodeo Kings, country-folk singers Sylvia Tyson and Amelia Curran, pop artists the Barenaked Ladies and Hawksley Workman, and folk-pop trio The Wailin’ Jennys.

Never content to rest on his laurels, Cockburn keeps looking ahead. “I’d rather think about what I’m going to do next,” he once said. “My models for graceful aging are guys like John Lee Hooker and Mississippi John Hurt, who never stopped working till they dropped, as I fully expect to be doing, and just getting better as musicians and as human beings.” Small Source of Comfort, a reflection of Cockburn’s ever-expanding world of wonders, is the latest step in his creative evolution.