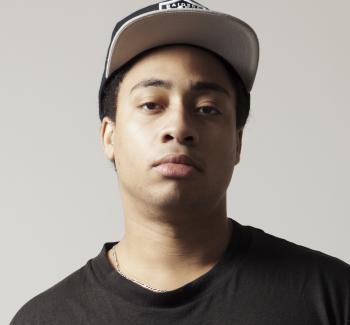 Artist,
Upper Class Recordings
Toronto, ON, Canada
"My name is Cadence Weapon. And I'm back." With that the Poet Laureate of Edmonton...proceeded to rip through a bunch of new songs like "Conditioning" and "Jukebox." The performance was frenetic and nuts. A tour de force as they say. We missed Cadence Weapon. We need Cadence Weapon. Welcome home." Vish Khanna, CMW 2012

Cadence Weapon continues to firmly establish his legacy as a sonic pioneer while constantly pushing the rap and electronic music envelope. Following his critically acclaimed, Polaris Music Prize nominated albums Breaking Kayfabe and Afterparty Babies and  a  two  year  term  as  Edmonton’s  Poet  Laureate,  he  returns  with  a  brand  new  album, Hope In Dirt City out on Upper Class Recordings.

Roland Pemberton was born with hip hop in his DNA. His father, Teddy Pemberton, a Brooklyn native and the muse for Cadence Weapon's acclaimed sophomore album, Afterparty Babies, was a pioneering college radio DJ and in 2010 was inducted into the Hall Of Fame during Canada's National  DJ  Awards,  the  Stylus  Awards.  He’s credited for introducing hip- hop  to  Rollie’s  hometown  of  Edmonton,  Alberta  through  his  show,  The  Black   Experience In Sound on CJSR-FM.

Following in his father's groundbreaking footsteps, Rollie discovered he wanted to rap at the tender age of 13. Pemberton first gained massive grassroots  support  for  his  mixtape  “Cadence  Weapon  Is  The  Black  Hand”. He soon  followed  up  with  his  explosive  debut  “Breaking  Kayfabe”  and the album yielded instant praise and notoriety culminating in nominations from the  Polaris  Music  Prize,  the  Canadian  Indie  Awards  and  “Best  Rap  Album  of 2006”at  the  Plug  Independent  Music  Awards,  and  won  the  CBC  Radio  3’s  Bucky  Award.

Deemed by Dazed and Confused as "hip hop's saviour", Cadence Weapon is changing the game. Hope In Dirt City is a clearly defined and emotionally mature statement of intent that represents the culmination of these experiences. Pemberton applies an interesting approach to production using samples as a foundation for writing the album, then working with live instrumentalists (Jered Stuffco (DVAS) on keyboards, Ian Koiter (Shad) on bass and string arrangements, Eric Lightfoot on drums and percussion, Paul Prince (The Cansecos) on guitar and Brett Miles (Magilla Funk Conduit) on saxophone) to reconfigure his original compositions. Pemberton then turned the band-recorded tracks into samples for  the  album  to  “achieve  a  listenable, honest approach to integrating a live band into his setup”.    “I  wanted  to  have  a  live  feel,  but  I  didn’t  want  to  sound  like  the  Arsenio  Hall  band,”   Pemberton told Paste.   “I   wanted   to   make   it   ambiguous   between   where   the   sample   ends   and   the   live   band   begins.”     Referencing   his   album’s   first   single   “Conditioning”   Pemberton   goes   on   to   say,   “Originally   it   was   a   drum   machine   demo,   I   wanted   it   to   be   a   Bo   Diddley song. I basically have a band play it as a rock song, then when I took it home, I switched it into half time and turned it into a hybrid-blues  track.”

Composed of a unique hybrid of psychedelic soul, old school rap, IDM and mutant disco; Hope In Dirt City is a groundbreaking achievement in hip-hop. Cadence Weapon has returned to bring rap back to its essence.