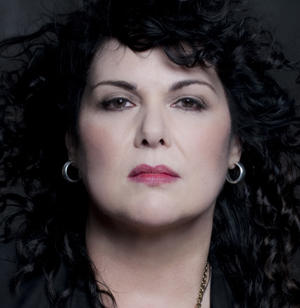 @officialheart
Anyone who has turned on the radio in the last several decades knows Heart intimately. California born Seattle bred sisters Nancy and Ann Wilson are behind some of rock’s most iconic hits from the wild call of “Barracuda” to the epic lilt of “Magic Man” to the deranged shriek of “Crazy On You.” Nancy’s guitar and Ann’s wail are practically part of the national archive, indelible elements of American pop culture. In their nearly forty years as a band the Wilson sisters have been lauded as sex symbols, idealized as feminist icons, and worshiped by critics and fans alike, selling over 35 million albums worldwide and thrilling audiences with their raucous live show. But as the band gear up for the October 2nd release of a brand new studio album, Fanatic, as well as their first ever biography, Kicking and Dreaming: A Story of Heart, Soul and Rock and Roll the question isn’t where has Heart been but where are they going next?

“When you’re pushing sixty you know what you want and you go for it,” Nancy says. “You’re not going to test it out for five or ten years, you’re going to get in the car and drive.”

After rising to rock power in the 70s Heart racked up massive hits from their debut (in 1976) all the way through the 90s including songs like “These Dreams,” and “Alone.” Then, in the 2000s the Wilson sisters focused on other priorities. Nancy composed and performed award winning film scores to Jerry Maguire and Almost Famous. Ann developed her career as a solo artist. But you can’t keep Heart quiet for too long. In 2010 the band returned to the Billboard Top 10 with the release of Red Velvet Car and a Top 5 DVD Night at Sky Church. The subsequent tour reinvigorated the sister’s taste for live performance and life on the road but as they looked forward to recording another record, something seemed to be in the way: their past.

For years friends and colleagues had been asking the sisters to do a book about Heart and it just didn’t feel right. “They always came to us with a real lascivious tabloid-y type idea,” Ann says. “You know - think of the ugliness and the dirtiness – but that’s so one dimensional. We’ve had moments of failure and vulnerability and humiliation, sure, but ours is also the story of women who are being told there are rules to follow and just won’t do it.” In the wake of the success of Red Velvet Car it felt like it was finally time to tell the true story of Heart’s past as a means of embracing Heart’s future. So the sisters decided to collaborate with veteran music journalist and Seattle rock scene expert Charles R. Cross, who also wrote the definitive Nirvana biography, Heavier Than Heaven as well as Roomful of Mirrors, a biography of Jimi Hendrix. “We figured if anyone can get the true rock and roll story of it all it’s going to be him,” Ann says.

Once they knew the book was happening, in typical Wilson sister fashion they didn’t hold back. “There’s really no point in going through all of this if you’re going to write a white wash – we really hung ourselves out there,” Ann says. Nancy agrees “I started talking about the book with Charley while I was going through a divorce, which was really hard, but later I was able to have the objectivity to come at the entire book from a healed sort of place. We don’t leave much unsaid.” While they were mining the deep past with Cross, the Wilson sisters were also pulling shoeboxes out from under their beds, so to speak, in search of special rarities to include on the first ever Heart box set, Strange Euphoria, which came out in June. “Part of the Devil’s bargain we’ve made with the industry is that there’s a very tight idea of what the outside world perceives Heart to be and a lot of the time the songs we’ve come up with don't fit that,” Ann explains. “We really do have multiple faces and this box set shows that.”

Between the book and the box set, the Wilson sisters had fully exorcized the past and now it was time to think about the future; they started writing songs that would become Fanatic. “We did it every possible way,” Nancy remembers. “We had many nights together on the tour bus. Then, when I was in LA and Ann was in Seattle we were each emailing each other lyrics ideas and [producer] Ben Mink groove ideas.” The threesome eventually congregated in the sister’s hometown outside of Seattle and had a series of what Nancy calls songwriting “pow wows.” When it came time to record, the band’s approach was organic, very much in keeping with their roots as true performance oriented rock band. “These days things are formulated digitally or layered or looped and assembled but this is live groove,” Nancy explains. “It was our mission to go in there and capture the energy as it magically happens without too much over-thinking or repetition, just letting it escape.” When you put the Wilson sisters plus some trusted musicians in a room with instructions to feel their way around, great things happen. “You do a take and you listen and you go that’s so great, but that’s not the one, and then you go and have a snack and keep going and suddenly it’s like everybody’s hair goes up and it’s like: that’s the one!” Nancy says with glee.

From the crackling guitar noise and vicious drumbeat that drives album opener and title track “Fanatic” through the scorched-earth power of tracks like the “Mashallah” Fanatic is definitely a full-bodied American rock and roll record. “I place it really highly among the albums we’ve made, right along side Little Queen or Dog & Butterfly,” Nancy says. “Those are two really heavy hitting albums and this one has that same spark.” But the record's power is nuanced. “Million Miles,” has delectably ominous prog rock undertones, the collaboration with Sarah McLachlan, “Walkin’ Good,” has a sweet folky delicacy, and “Pennsylvania” is a poetic painting of a ballad. Among the album’s stand outs is also “Dear Old America,” which blends Heart’s signature rollicking rock and roll guitars with poignant lyrics about soldiers coming home from war, a topic close to both sisters’ hearts since they were born and raised as Marine corps brats. As it should, the title track most succinctly encapsulates the spirit of Fanatic. “I thought of Nancy who is so devoted to the idea of love and especially to the idea of romantic love,” Ann recalls. “She will not take no for an answer. There is no way you could ever convince her that it’s not real. She will not hear it. She’s a true fanatic about love, and I thought how cool and inspiring is that? The meaning then grows to become a worldview.”

Honoring your past while believing in the beauty and power of what’s to come has always been central to Heart’s ethos - it’s reflected in the brashness and defiant emotion of their signature sound. No one should be surprised that at this point in their career the desire to make emotional, rebellious music has only intensified. “We always joke around that we are warriors for love,” Nancy says. “We are the peace core and guitars and dreams are our lethal weapons. We say yes to inspiration. Say yes to the impossible impractical thing. We say yes to love. We go out in the trenches and fields with our weapons and shoot.”