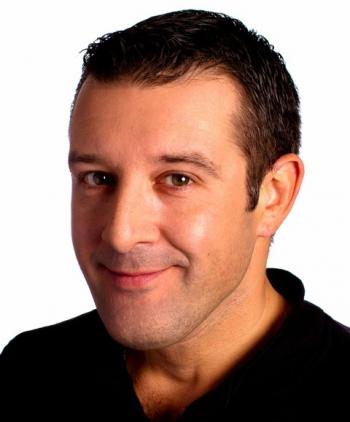 @ScottFoxonair
Scott Fox is a Toronto based radio and television personality. He has hosted the morning show on Z103.5 in Toronto for 12 years. He has won 19 Toronto Sun Readers Choice Awards (including Top Toronto Personality), 4 Top Choice Awards (including Top Radio Morning Show host), and been awarded the Queen Elizabeth II Diamond Jubilee Award to recognize his community service efforts within the G.T.A. Scott is a very active social media user, working daily with large audiences on Facebook, Twitter, Linked In, Instagram, and DoUKnow.com

Scott Fox has been on the radio since age 16. He started off as an intern at AM1480 in Newmarket. His job was to get coffee, wash station vehicles, and assist the announcers.

A lucky break (someone got sick) saw Scott get an opportunity to broadcast live from a charity car wash. The rest is history.

AM1480 flipped to 88.5 The Phoenix in 1994. Scott was assigned the on-air role of weekends and swing shift for the adult contemporary format. After one year with lower than expected sales, the radio station flipped to 88.5 The X and played retro 80’s and cutting edge new rock. Consultants for the format flip promoted Scott to the evening shift where he hosted Interactive at 8 and Smash or Trash.

88.5 The X’s success was short lived. The radio station was sold after 14 months. The new owners changed the format to “all dance music, all the time”. Several names changed with the new owners. Then known as Scott Chapman; Scott became “The Chap-Man” and 88.5 the X became Power 88.5.

In addition to hosting the #1 rated evening show on Power 88.5, Scott worked behind the scenes in the music department and eventually took over as program director in 1997.

After a well publicized police raid on several affiliate companies, the owners of Power 88.5 opted for an image and format change. Power 88.5 became known as 88.5 The Kat “Today’s Cool New Country.” Scott stayed on with the station as the afternoon drive host, program director, and music director.

In May 2000, Dufferin Communications took initial steps to purchase 88.5 and brought Scott on as a weekend and swing shift announcer on their flag-ship Top 40 station: Hits 103.5. Because of the former affiliation to Power 88.5, the name “Chap-man” was retired and Scott was assigned the moniker “Scott Fox”.

On Valentine’s Day 2001, Scott Fox took over as morning show host on Z103.5 and was paired up with former Skywords traffic reporter Josie Geuer. Josie’s run on Z103.5 ended in March 2002 when she accepted a job at rival station Kiss 92.

Josie’s last day was the same day that Dave Blezard was scheduled to join the morning show as a second co-host.

Scott Fox & Dave ruled Z103.5 mornings for 14 months before Melanie Martin was brought on to co-host with Scott and Dave. Scott Fox, Melanie, & Dave brought Z103.5 mornings to a new level in Toronto morning radio. For the first time ever, Z103.5 earned a 5.0 share in the Toronto radio ratings.

In April, 2011 Scott and Z103.5 parted ways. After a summer of filling in on adult-contemporary station CHYM 96.7 in Kitchener, Scott moved back to Toronto radio at Rogers Radio Top 40 flagship station, Kiss 92.5 to take over the 9am-2pm shift for Taylor Kaye while she was on maternity leave. Simultaneously, Scott co-hosted the Top 20 Most Wanted on CHYM 96.7 with afternoon host Adele Newton. In October, 2011 Scott was awarded the Toronto Sun Reader’s Choice Award gold medal for Toronto On-Air Personality Of The Year. Scott’s short run at Kiss 92.5 ended in May, 2012 when his maternity leave contract expired.

Scott was not off the air for long. On Friday June 22, 2012 Scott returned to Toronto morning radio as (once again) host of the Z103.5 Morning Show. In August, Kat Callaghan from Kool-FM, Kitchener and CHUM-FM, Toronto joined him as co-host. Currently you can hear Scott and Kat on Z103.5 from 5:30-9am, Monday-Friday.