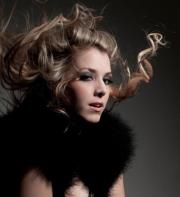 This talented Toronto based singer/songwriter has evolved into a vocal powerhouse; she has been honing her chops, gigging at festivals including Canadian Music Week and NXNE, winning The Beat 91.5’s Rhythm of the Future talent search (2004), CMW’s Urban Star Quest (2005) and The Flow 93.5 Hook-Up Prize for song production at Honey Jam (2005), giving her the opportunity to work with accomplished Canadian artist/producer, Saukrates.

In 2008, Nuic was nominated for two Toronto Independent Music Awards, winning the award for ‘Best Pop’ artist. In 2009, she was hand-picked to sing alongside Jarvis Church on CBC Radio’s 50th anniversary celebration of Motown Records, ‘Canada Raves on Motown’. Red Book Chronicles’ high-energy fusion of funk, R&B and soul also attracted substantial interest from national media outlets such as Entertainment Tonight Canada, Canada AM and The National Post.

On Flaws of Attraction, the Toronto-based singer/songwriter doesn’t pull any punches. The arrangements are blindingly tight and the lyrics are raw, uncompromising and characterized by hooky turns of phrase that are both universal and intimate. Although Flaws of Attraction plumbs the collateral damage that can result from acting on impulse – with ‘the logic turned off and the crazy turned on’. It’s the kind of record anyone who’s felt betrayed by their own actions, or those of someone close to them, can relate to. “It’s about coming full circle, from being in a great place to being heartbroken, to getting it all out and wanting to come back to love.”

With Flaws of Attraction, Lori Nuic invites listeners to join her on that ride to discover for themselves just how good it can feel – with performances so candid, it is as though she’s singing every line as if living it, at that moment, for the first time.