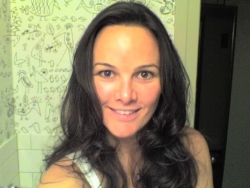 @thecatempire
Correne Wilkie is the Manager of International touring band The Cat Empire, Australian based Jackson Jackson, The Harry James Angus Band and Harry James Angus solo folk career.
She came to the music industry in 2001 with a background in marketing, PR and event management, primarily in the youth sector. Her previous education also explored writing, advertising and classical music.

Correne first met Felix from The Cat Empire at a friends family lunch. Three years later he randomly contacted her and invited her to a show of his “new band”. A friend describes that when she saw The Cat Empire play “she fell into a trance that she has never come out of”. She was supposed to start a new career in advertising the following day, but found herself walking away from the job she had spent months negotiating, to take a leap of faith with the band. They agreed to a 3 month trial to see what might be possible…

Correne's keen understanding of youth culture, marketing and music helped her launch The Cat Empire onto the Australian Music scene in 2003, securing them a deal with EMI/Virgin Records, and rocketing them to double platinum status and sold out Australian tours within months.
In those days she was everything from Manager to Booking Agent, Travel Agent, Promoter, Roadie, Tour Manager, Merchandise sales person, Chef, Guardian and mentor.
With well over a million record sales, number one debuts, platinum dvds, countless ARIA nominations (and award), and a whole host of other credits to their name, Correne's next mission was to take the band to the international stage.

The Cat Empire have subsequently toured non-stop in most parts of the world, with particularly notable success in Europe and North America. They have a massive and wildly loyal fan base, which now sees them playing the worlds most coveted stages. They have performed over 850 shows in 10 years, to over 5 million people, and released their 4th studio album CINEMA in 2010 with another slated for 2013.

Under Correne's management, the band has headlined some of the world's biggest festival stages, as well as becoming favourites with USA entertainment shows, performing on Letterman, Leno, Conan O'Brien. They have licensed their records to Virgin (Australia), Velour/Universal (USA), Indica (Canada) and in 2007 signed a lucrative deal with Universal for the rest of the world.
Correne is a dynamic entrepreneur with highly developed interpersonal skills and business acumen. In 2004 Correne was awarded the Australian Music Manager of the year award. She has been nominated in the Telstra Business Woman of the Year Awards. She regularly lectures in Music Management and is an active mentor to many bands and aspiring managers. She funds, sits on the selection committee, and speaks on the panel for the JB Seed programme, is a committee member for The Victorian Music Council, a board member of Tunes For Change, and contributes to other programmes and events which promote the Australian Music industry to grow in positive ways.