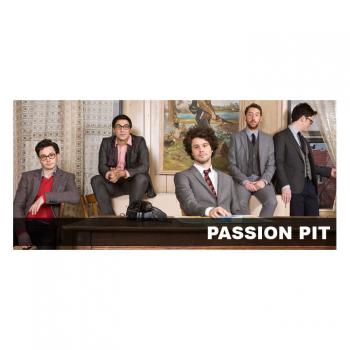 @passionpit
Michael Angelakos hears music in his head and knows exactly how he wants it to sound. The young composer/performer has already created two studio masterpieces -- Manners and Chunk of Change -- and -- with his fellow musicians in Passion Pit -- is taking his perfectionist pop vision to a whole new level in concert.

Launched a mere three years ago as a humble one man multi-track laptop project in Angelakos' college dorm room, Passion Pit has rapidly evolved under fire into an in-demand concert attraction, with sold out tours and a growing international reputation based on the power and immediacy of the music.

Passion Pit is a two-fold entity sharing a single essence: there's in-the-studio Passion Pit, essentially comprised of Michael writing, designing, and constructing intricate cathedrals of sound, and Nathan Donmoyer handling live percussion and programming. Ian Hultquist is also featured on Manners performing guitar on songs such as "Make Light" and "Moth's Wings." And then there is the in-concert Passion Pit, a loose yet tightly calibrated ensemble who turn Angelakos' musical studio blueprints into a cathartic live experience.

Angelakos was 20 years old when Passion Pit took its first hold on his psyche in the form of a multi-song "Valentine" to his then-girlfriend, recorded in his bedroom on readily available ad hoc technology including the built-in microphone on his laptop. After signing with indie label Frenchkiss, he opted to add more recordings that had been made shortly after the he self-released the collection of songs -- including the signature track "Sleepyhead" -- to his dorm room set, releasing it officially as the lo-fi EP Chunk of Change.

Shortly thereafter, Angelakos gave the first Passion Pit performance, which consisted of himself and a laptop singing the EP's songs in front of some rear-screen projections in the basement of his school to approximately 15 of his friends. The "half-show/half-installation" caught the attention of Angelakos' friend and musical acquaintance Ian Hultquist, who approached Michael about the possibility of starting a band to play the music live. A few months later, with the help of Hultquist, Angelakos was building a full ensemble capable of realizing and producing the sounds in his head and taking them to the stage.

Within mere months of forming, Passion Pit -- voted the Best New Local Act of 2008 in the WFNX/Boston Phoenix Best Music Poll -- was opening for high profile bands like Death Cab For Cutie, Girl Talk, and Yelle, while mostly headlining their own sold-out shows. The learning curve for Passion Pit was short and steep. The pressure was unquestionably intense, especially for all shows leading up to -- and even a few months of those after -- the release of Manners (which often stood-in for the luxury of a proper rehearsal time). Those months of touring showcased Michael and company evolving from aesthetic chrysalis to full-fledged band, a leap that has impressed both early skeptics and die-hard fans alike. One of Angelakos' compositions/recordings that began resonating immediately with music fans is his whirling surrealistic pop paean to sophisticated dreamland, "Sleepyhead," with its other-dimensional choral hook sculpted from a mutated and cut-up sample of Celtic artist Mary O'Hara. Michael, who counts 70s folk among his many obsessions, is extremely hesitant to sample any music at all, preferring to use songs and sounds as cryptic reference points and textures rather than literal references. When he listened to Mary O'Hara's take on the classic folk tune, he immediately heard a whole new song, finding in the Gaelic phrase for 'Oh, My Little Boat,' the perfect sonic flourish for "Sleepyhead." The track began attracting attention shortly after he posted it online.

Angelakos is continually writing according to his own technique. According to Michael, "Sleepyhead" just appeared in his head and was completed in less than two hours on his computer. Knowing exactly how to perform it vocally, he ran over to Hulquist's apartment for the purposes of singing the song into a better microphone, and wrote the lyrics on the spot as he recorded them.

By 2009, "Sleepyhead" had reached #9 on the Billboard Heatseekers chart and inspired its own core of YouTube devotees interpreting the song. Michael likes the clips with acoustic guitars, finding it intriguing how fans can take such a divisive and almost-karaoke proof vocal sound and sing along to it with such enthusiasm. To date, the official "Sleepyhead" video has accrued more than 3 million views on YouTube with many of the fan tributes accumulating hundreds of thousands of views.

When it came time to record an official debut album, Angelakos went to work with producer Chris Zane for Manners, the first full-length Passion Pit collection, essentially writing and playing all music on the album with the exception of programming and drumming by Nathan Donmoyer and Ian Hultquist's guitar work on select tracks. Zane played a vital role in helping Michael realize the Passion Pit sound in the studio, eventually even developing the role of "older brother" to both Angelakos and Donmoyer during the painstaking recording process.

On Manners, you can hear what someone like Angelakos does in a proper studio where he can get virtually any sound he wants. He approached the project with the intent to make an album that was "one very particular and extremely lucid snapshot of how I was feeling and existing at a particular moment." As for the lyrical material, Angelakos purposefully matched the music with oblique, impressionistic, densely layered, abstract lyrics that utilize both phrasing and performances that, according to Michael, "were not meant in any way to match the musical content or even style of music." It was Angelakos' mission to mask this emotional complexity with the immediacy and irresistible nature of plain and simple pop music.

Angelakos has always carried his pop vision in his head and, now that's it's 2010, Passion Pit is bringing that vision to the world. Stepping out from behind his keyboards to become a front-man, Angelakos is more than ably supported by Ian Hultquist and Ayad Al Adhamy on keyboards/synthesizers and a pulsing throbbing dance-heavy rhythm section consisting of Jeff Apruzzese on bass/synthesizer and studio collaborator Nate Donmoyer on drums and programming.

In a little more than a year, Passion Pit has evolved from a one-man dorm room project into a burgeoning band that has surged above the buzz, capable of selling out three nights at New York's Terminal 5 (January 2010) and a night at Prospect Park in Brooklyn. Passion Pit has even landed high-profile slots on a series of international festivals including Australia's Big Day Out and the UK's Glastonbury Festival as well as North American festivals including Bonnaroo, Lollapalooza and Coachella.