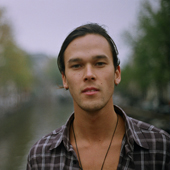 @justinnozuka
"I just want to be myself, you know?" says Justin Nozuka. The briefest of nervous laughter, and a wry grin, say what he can't say for himself: There is such a thing as too much introspection, even for a guy who's made his mark by being candid and reflective. That irony is informed by the old soul behind 22-year-old Nozuka's fresh-faced countenance, and the duality is striking. New York-born, Canadian bred Nozuka is young enough to have interview jitters, but sufficiently wise to recognize when he stands to sound, well, full of it. So he's ever vigilant, lest his character fall out of tune with who he wants to be: "I don't wanna create [an inflated image of myself]."

Yeah, 'cause that's someone else's job. Nozuka's charge is to craft songs that make his listeners feel like they were up all night together and shared sleep-deprived confessions. The first collection of these, Holly (Coalition/Glassnote Records), is named for Nozuka's highly supportive mother, and came out when Nozuka was just 19. He penned the first songs, "Supposed to Grow Old" and "I'm in Peace," when he was fifteen, and wrote the rest between age 16 and 17, but the press marveled at his mature sound and vision, calling Nozuka "as soulful and wise as blues greats four times his age." His follow-up, You I Wind Land And Sea, will cement and further define that reputation-even as Nozuka endeavors to stay grounded amid copious praise of Holly and his performances on tour and television (VH1's You Oughta Know, Jimmy Kimmel Live, Good Morning America NOW, mtvU Woodie Awards).

"I realized," Nozuka explains, "that for the music to be free and open, with no restrictions, my creative process had to be more inclusive."

Although many of the songs were written without the band, Nozuka says they practiced-and sometimes performed-them on tour, to develop "a collective feel." So when they got to the studio, Nozuka gave the songs up to his band and producer Bill Bell. "We sorta went right back to the ground and started building again. It was wonderful...a strong learning experience for myself and my band"

YIWLAS encompasses a dozen deep, liberating tracks that expand on the acoustic folk-soul foundation base Nozuka laid with Holly and introduce key influences that Nozuka couldn't convey without his band. The moody, tribal "Gray" checks Jeff Buckley as much as Ray LaMontagne; "Carried You" nods to Philly soul and disco, first single "My Heart Is Yours" applies gospel devotion to romantic soul, and "Unwoken Dream (King With Everything)" mines the psych-folk genre-an ostensible left turn for Nozuka, yet perfectly executed. And throughout the album, the production nods subtly to Radiohead, adding a third dimension to Nozuka's sound which (fans of Holly will be happy to hear) finds his powerful soul pipes running as smoothly as ever.

Whereas Holly "just sort of happened without any real concept," Nozuka feels YIWLAS has "more of a vision" behind it. "There was definitely more of an idea of what kind of sound I wanted," he says. "I wanted it to be very natural... and it had to sound like us. I wanted to be able to hear and feel humans behind the creation of it all, as opposed to something that was 'hit' driven." He credits the experience of touring with his band.

"It was important to have songs that were open," he says, citing "Gray" as an example of consensus through alchemy. The song "transformed so much" in the studio, taking on "this powerful tribal feeling" due to the percussion, but also benefiting from a group effort to avoid over-thinking. "With art, it's most important to just to follow your senses. It doesn't matter if it's been done before or if it's not correct in pop culture or whatever. If it feels right, it's right."

Nozuka says the openness policy was "a big moment" in both his creative and personal growth. "I try live moment to moment," he says, but on YIWLAS's final track, "How Low," Nozuka bares more of his soul than he's accustomed to, because "it was just created out of a place of openness. I was just in the moment, no noise in my mind, no questions. I allowed the song to happen and it just felt great." While he doesn't know how to describe the song, he feels its very existence is the "absolute essence of art... a place that is real and mystical and aw-inspiring."

Call it paradise, nirvana, whatever-but from where Justin Nozuka sits now, everything looks good. He's happy and prolific, and eyeing a prosperous 2010. Although there are tours and TV appearances and interviews to come, he's gonna stick to the plan that works. "I just am going with... the flow."