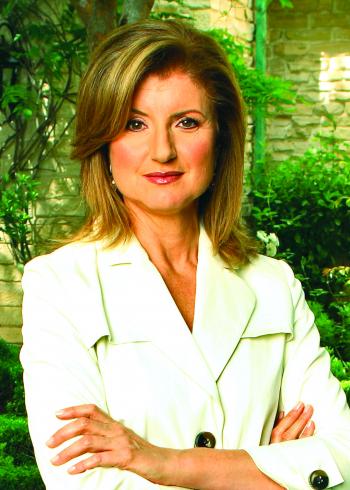 @ariannahuff
Arianna Huffington is the president and editor-in-chief of the AOL Huffington Post Media Group, a
nationally syndicated columnist and author of thirteen books.

In May 2005, she launched The Huffington Post, a news and blog site that quickly became one of themost widely-read, linked to and frequently-cited media brands on the Internet.

In 2006 and 2011, she was named to the TIME 100, TIME magazine's list of the world’s 100 most
influential people as well as Fast Company’s list of the 100 Most Creative People in Business;
Financial Times’ 50 People Who Shaped the Decade; Newsweek’s Top Ten Thought-Leaders of the Decade; Forbes’ lists of Most Influential Women in the Media and The World’s 100 Most Powerful Women and Vanity Fair’s 2011 Top 50 New Establishment list.

Originally from Greece, she moved to England when she was 16 and graduated from Cambridge
University with an M.A. in economics. At 21, she became president of the famed debating society,
the Cambridge Union.

* Third World America: How Our Politicians Are Abandoning the Middle Class and Betraying the
American Dream was published in 2010.

* Right Is Wrong: How the Lunatic Fringe Hijacked America, Shredded the Constitution, and Made
Us All Less Safe was published in 2008. Both a withering indictment and a hopeful call to arms,
Right Is Wrong makes the case that America has been hijacked from within by the “lunatic fringe” of the Right that has taken over the Republican Party - enabled by a compliant media that act as if
there is no such thing as truth and are more interested in cozying up to those in power than in
holding them accountable.

* On Becoming Fearless....in Love, Work and Life is Huffington's most personal book to date, offering a road map for achieving fearlessness in every aspect of life, a straight-to-the-point manifesto on how to be bold, how to say what needs to be said and do what needs to be done in order to find the freedom to love, lead and succeed.

* Fanatics and Fools: The Game Plan for Winning Back America offers a scathing portrait of our
contemporary political landscape with a bold, inspiring and practical approach to restoring America tothe promise envisioned by our greatest leaders. It was published in 2004.

* Pigs at the Trough: How Corporate Greed and Political Corruption are Undermining America, a
New York Times bestseller, was published in 2003.

* How to Overthrow the Government, on the corruption of our political system and the need for
reform, was published in 2000.

* Greetings from the Lincoln Bedroom, a political satire, was published in 1998.

* The Fourth Instinct, on the longing for meaning in a secular world, was published in 1994.


* Picasso: Creator and Destroyer, a biography of Pablo Picasso was published in 1988. It was a
major international bestseller, translated into 16 languages. The book was made into a film starring
Anthony Hopkins as Picasso and produced by Merchant-Ivory for Warner Bros.

* The Gods of Greece celebrates the power of myths as guides to forgotten dimensions of life and
ourselves. Atlantic Monthly Press republished it with paintings by Françoise Gilot.

* The Woman behind the Legend, a biography of Maria Callas published in 1981, quickly became an international bestseller.

* After Reason, on political leadership and the intersection of politics and culture, was published in
1978.

* The Female Woman, on the changing roles of women, was published in 1974 by Random House
and translated into 11 languages.

She serves on several boards that promote community solutions to social problems, including A
Place Called Home, which works with at-risk children in South Central Los Angeles. She also serves on the board of EL PAIS and the board of the Committee to Protect Journalists.