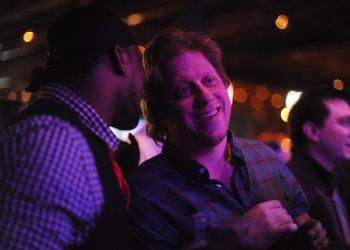 In 2014, Shapiro entered into an exclusive deal with Phil Lesh, by which the Grateful Dead co-founder performed at Shapiro’s venues and events. In July 2015, Shapiro created Fare Thee Well, Celebrating 50 Years of the Grateful Dead. The heralded event took place over five nights at Levi’s Stadium in the San Francisco Bay Area and Soldier Field in Chicago, earning acclaim as “the biggest concert event of all time.”

Shapiro is the founder of LOCKN’, an annual four-day music festival defined by its creative, collaborative programming, which has drawn over 30,000 fans to a farm in rural Arrington, VA. He also created Jazz & Colors, an experiential music event held in such iconic locations as New York City’s Central Park and the Metropolitan Museum of Art, along with Chicago’s Field Museum.

He serves as publisher of Relix Media Group overseeing the iconic print publication Relix Magazine, the highly trafficked music website Jambands.com and digital ad agency, Hear & There. Billboard acknowledged the collective success of his endeavors by naming him to their Power 100 lists of 2015 and 2016.

Some of his other projects include the Jammy Awards, America’s largest Earth Day event and the IMAX concert films U23D and All Access. Never one to sit still, he also co-founded two retail businesses, Stone Fox Bride and The Hoodie Shop.

Shapiro sits on the board of a number of renowned civic and charitable organizations, including: The Rock and Roll Hall of Fame (where he is a voting member), New York Public Radio, New York City Parks’ Arts Committee, Central Park Summerstage, HeadCount and The Lowline. He also co-founded the environmental consulting firm Green Order.

Peter Shapiro’s eclectic career path has led to acclaimed and groundbreaking projects, beginning with two documentary films on The Grateful Dead, produced while a student at Northwestern University. Upon graduating, Shapiro drove through the 48 continental United States, directing American Road, which premiered at Sundance in 1997 and featured a score by Phish. In 1999, Shapiro produced the IMAX concert film All Access (Sting, Santana, Kid Rock, Sheryl Crow, BB King, Dave Matthews) and in 2008, U23D, the widely lauded concert film that was the first live-action film released in Digital 3D.

He is the founder of Lockn’, a 4 day camping and music festival in Arrington, VA which drew 25,000 attendees for its 2013 debut, as well as Central Park Jazz & Colors Festival an experiential music event encompassing the 843 acres of Central Park and featuring 50 musicians, and Jazz & Colors at The Met, 15 ensembles throughout the largest art museum in the United States. Peter served as Executive Producer of seven Jammy Awards shows, America’s Largest Earth Day event, Green Apple Festival (large-scale festival events in eight cities across America) and The Climate Rally (attended by100,000 people on The National Mall).

His acclaimed endeavors include the IMAX concert films U23D and All Access, the annual Jammys awards show, America’s Largest Earth Day event, Green Apple Festival, the leading 3D technology company and 3ality Digital. He serves as publisher of Relix Magazine, which also owns the popular website, Jambands.com along with digital ad agency Hear & There. His retail initiatives include The Hoodie Shop and Stone Fox Bride.

Peter recently entered into a unique exclusive performance deal with Phil Lesh, ensuring that the Grateful Dead co-founder would focus on Shapiro’s venues and events in 2014. He also partnered with the family of Jerry Garcia to open Garcia’s at The Capitol Theatre, a bar and music venue in the late performer’s honor.

In 2015, Shapiro was listed on Billboard’s Power 100 List for “Most Influential People in the Music Business.” Shapiro is a member of the Arts Committee of the City Parks Foundation’s Board of Directors, a co-founder of the environmental consulting firm,

GreenOrder, and a board member of Headcount, Central Park SummerStage, The Rock and Roll Hall Of Fame, The LowLine and New York Public Radio.