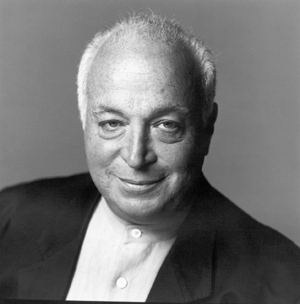 Chairman - Sire Records/VP - Warner Bros. Records,
Warner Music International
New York, NV, USA
In music business legend Seymour Stein’s lifelong adventure with rock & roll, he has been prominently engaged in wave after wave of popular music’s successive cycles of taste, from the Brill Building sound of the 1960s through to his wholesale signing of New York punk luminaries like the Ramones and the Talking Heads in the 1970s, and a little later, Madonna and the Pretenders, right up until today with bands like the Von Bondies. His ability to divine what’s great in each new generation of music has made Stein one of the rare record company men whose appreciation and approbation is sought not only as a means to a career and money, but also as an artistic accolade. His label, Sire, is a crucial example of the evolution of an American indie.

Stein’s passion for musical creativity has remained consistent since he was at High School. Just thirteen when he visited the Billboard offices in New York’s Palace Theater building, in 1956, Stein was already not only a fan but an avid collector of pop and rhythm & blues records. Intent on the music business, he hoped to kickstart a career and compensate for his youth by in-depth knowledge of the bound volumes of Billboard he was studying, copying down the charts back to the late 1930s. Keen, quick and likeable, Stein found the first of many supporters in Tom Noonan, Billboard’s Chart Editor, who welcomed his enthusiasm. Together they worked to perfect the original Billboard Hot 100 Chart.

While working part-time for Billboard during high school in the 1950s the young man came to the attention of a great mentor and inspiration, Paul Ackerman. The publication’s legendary Music Editor sent him out to review several early rock & roll gigs. Ackerman was a crusader for American roots music, and it was on his watch that Billboard transformed the race music charts to rhythm & blues and the hillbilly music charts to country & western. Turning his protégé on to great recorded music from as far back as the late nineteenth century, Ackerman greatly furthered Stein’s musical knowledge and insight.

While still at Billboard, Stein also met his second and most influential mentor, Syd Nathan, Founder and President of King Records, who taught him the music business, literally from the ground up. A pioneering indie mogul, Nathan’s label was home not only to R & B stars like James Brown, Hank Ballard and the Midnighters, Little Willie John, Freddie King and Bill Doggett, but a complete roster of country & western greats as well.

Nathan took an instant shine to him and invited him out to the record company’s headquarters in Cincinnati for two consecutive summers. During these two ten-week periods, Stein learned the record business from the bottom up, working in every department: pressing records, packing them, working in the studio and also working with King’s A & R staff, which included Henry Glover, Ralph Bass and Sonny Thompson.


When he graduated from High School in 1959, Stein changed his mind about studying journalism. Instead he accepted a position he’d been offered: Billboard’s Chart Editor.

In 1961, Stein left Billboard and moved to Cincinnati, where he worked for two years under Syd Nathan at King. Then, two years later, he came home to NYC to work for his third mentor, George Goldner, notable as the man most responsible for bringing Latin rhythms, like the mambo, to America. While Stein was still at school, Goldner had discovered and first recorded Stein’s equally youthful contemporaries, the iconic doowop group, Frankie Lymon and the Teenagers. To release the many teen talents he was discovering, Goldner became a multi-label entrepreneur, founding several entities including Tico, Rama, Gee, Roulette, Gone and End.

When Stein joined his camp, many years later, Goldner was just about to join forces with the legendary songwriting team of Jerry Leiber and Mike Stoller and invited Stein onto the team. Over the next two years, their company, Red Bird Records, grew to become one of the most important indie labels in America, with a string of unforgettable number one hits like, “Chapel of Love” by the Dixie Cups, “Leader of the Pack” and “(Remember) Walking in the Sand” by the Shangri-Las and “The Boy From New York City” by the Ad Libs.


Red Bird Records label was based on the 9th floor of 1619 Broadway, the legendary Brill Building, then the focal point for music publishers, indie record labels and producers. Yet despite huge hits by the Shangri-Las, the Dixie Cups and others, Red Bird Records only enjoyed a two-year run and ceased to exist in 1966, largely due to internal wrangling between the partners. For the only time in his career, Stein found himself disillusioned and out of work, at twenty three years old.

But Stein soon rallied when he went into business with a neighbor, the record producer, songwriter and artist Richard Gottehrer, whose FGG Productions, (responsible for hits by the McCoys, Angels and Strangeloves,) was located just one floor up, on the 10th floor of the Brill Building. Stein and Gottehrer teamed up to form Sire Records in early 1966 and remained partners for eight years.


Initially, Sire was a production company with a logo and distribution through CBS. The most memorable signing was Chain Reaction, fronted by a very young singer named Steven Tallarico, later famous as Aerosmith front man, Steve Tyler. But the actual Sire label, with distribution by London Records, debuted in 1967, right around the time that Clive Davis took over the helm of Columbia Records.

Under Columbia’s previous regime, Mitch Miller, head of A & R, (who had nurtured the careers of super crooners like Tony Bennett, Rosemary Clooney, Jo Stafford, Johnnie Ray, Guy Mitchell and Johnny Mathis,) did not encourage the signing of rock acts. Hence, the company Davis inherited was very out of tune with the times. Armed with massive advances, for those days, Davis embarked on a signing spree with which Sire, already hardly able to keep up with the old financial standards, found it impossible to compete.


But Stein had a strategy. Since his early days at Billboard, he had been fascinated by British rock music and he began to explore the possibilities of working with labels like EMI, Pye and British Decca, whose releases went barely noticed in the United States. (In one striking example of America’s disinterest in UK acts, the Beatles were twice rejected by Capitol, which is why their first releases appeared on the indie labels, Vee-jay and Swan.)


Stein’s quest for talent in the UK and pursuit of an overseas licensing deal with British Decca brought him to England in 1967, at the height of the British blues-rock boom. There, he met a Decca staff producer named Mike Vernon, responsible for artists like John Mayall’s Bluesbreakers (featuring Eric Clapton), Ten Years After and Savoy Brown. Stein was instrumental in helping Vernon start up his own label, Blue Horizon Records, with Sire as a fifty per cent partner. Vernon’s first signing was Peter Green’s Fleetwood Mac and Chicken Shack, featuring Christine McVie on piano.


Though the Sire label’s initial ten years were rocky, there were many highlights. The first British band that the label released was the Deviants, licensed from Nat Joseph’s Transatlantic label, beginning a long and successful relationship between Stein and UK indies. In fact, Sire’s first successes, like the Climax Blues Band, Renaissance and Barclay James Harvest, were all UK bands licensed from EMI. The bond with Europe continued to prove profitable; Sire’s first gold and platinum records came from a Dutch band, Focus, closely followed by the Climax Blues Band.

During the period from 1967 – 1976, Sire was distributed by a succession of labels including London, Polydor, Paramount and ABC; Gottehrer left the label to produce full time in 1974.


But Sire’s big break was to come in 1975, when Stein signed the Ramones, followed by Talking Heads in 1976. Aware as always of shifting musical trends, Stein immediately sensed the importance of the New York downtown scene, and the punk – soon to be New Wave -- music emanating from clubs like CBGB’s and Max’s Kansas City. A year later, Sire concluded a distribution deal with Mo Osstin and Lenny Waronker at Warner Brothers, after which there was just no looking back. Stein’s signings were virtually synonymous with New York’s punk scene, with a roster of downtown luminaries like the Ramones, the Talking Heads, Richard Hell & the Voidoids, and the Dead Boys, among others. The Warners deal ushered in an 18-year period of unrivalled success for the label.

In fact, Stein’s stature as a tastemaker became so great that the indie band, Belle and Sebastian, named a song after him.

When Sire was purchased by Warners in 1980, Stein stayed on as President and continued to focus on artist development and run the company in much the same style and manner as when it was independent.


In 1995, Stein became President of Elektra Records. Then, in 1997, Sire was reborn as the Sire Records Group, later to merge with London Records. During this period, Stein signed and developed acts including Spacehog, Aphex Twin, Morcheeba, Paul Oakenfold, Guster, Everything, and Mojave 3, and helped restart the American careers of Boy George and Pet Shop Boys.


In 2002, Stein came home to Warner Bros., at the invitation of Tom Whalley and re-launched Sire. Today, Sire remains as eclectic as it was back in the 1960s with a roster that includes H.I.M., the Von Bondies, the Veronicas from Australia, Hot Hot Heat from Canada, the Distillers, the Fags and others, with A&R duties shared jointly by Stein and his partner, Michael Goldstone.

Summing up his career in a recent book, On the Record, by Guy Oseary, Stein observed:

“Sire started as an independent, and I still run it as an independent, even though the label has been owned by WB for over twenty years. Independent labels have been, and continue to be, at the forefront of every important change or trend in new music. I’m an independent at heart. Yesterday, Today, Tomorrow: “Be True to Your School.””