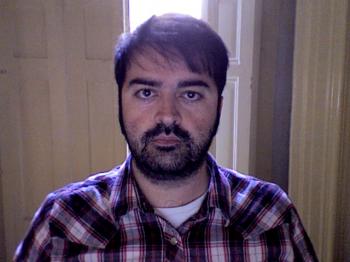 @HeartOfGoldSp
Born in Madrid, David Jimenez-Zumalacarregui (1971) studied Advertising and Public Relations in the Faculty of Information Sciences at the Complutense University of Madrid (1190-1997.) During this time he worked as a DJ in different bars in the Malasaña district of Madrid (El Sol de Mayo, Flamingo, La Vaca Austera, Sportivo) where he was heavily involved in the underground music scene, and began to work with different record labels and bands as a road manager among other things. At the beginning of the 1990´s he began promoting shows and organizing tours for Spanish and international bands. During his final years at university, he was head of sales at the distributor Surco, where he witnessed the phenomenon of the band Dover. Later he worked for Spanish Bombs, coordinating the booking and management of Dr. Explosión, Sindicato del Crimen and Fromheadtotoe. At the same time he created his own promoter, Love to Art. For 12 years, Love to Art organized tours for acts like Big Soul, Pyramidiacs, Cake, Gigolo Aunts, Ivy, Radio Birdman, The Jayhawks, Sloan, You Am I, The Chevelles, Steve Earle, Teenage Fanclub, Sparklehorse, Fountains Of Wayne and Matthew Sweet. In 2009 he founded Heart of Gold - the logical continuation of his previous ventures - and since then has directed the company and overseen the Spanish tours of international acts such as Eli Paperboy Reed, The Jayhawks, Lucinda Williams, Shout Out Louds and Redd Kross. Over time, the company has expanded to include departments of technical production, promotion, consulting and organization of events and festivals (Turborock Festival, Black Is Back!) At the moment, Heart of Gold is working with the San Miguel Primavera Sound festival, jointly managing the tours of artists like Animal Collective, Battles, Of Montreal and James Blake, among others. As well as directing Heart of Gold, David is co-director of the company Followspot, specializing in the internationalization of cultural projects abroad (SXSW Austin, CMJ NYC, Canadian Music Week, etc) and the development of professional trade fairs in the music sector, such as the PrimaveraPro.